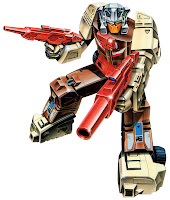 Chromedome is one of those toys that I actually got a little bit at a time (and, as evidenced by the images below missing the two laser cannons, I never did actually complete it!).  Oddly enough, I got the Nebulan, called Stylor, first, having found the tiny figure at a yard sale roughly twenty years ago.  I paid 10 cents for it, feeling like I'd gotten a rather good deal even at the time.  Seeing that Nebulans--the head components to the Headmaster figures--vary pretty wildly in price today (but 10 dollars seems to be a low-end price on eBay, and that's before shipping), I feel that my assessment back then has been vindicated several times over.

Some time later, I don't recall how long for certain, I picked up a "headless" body for about $5, and my Chromdome was more or less complete (if you don't count the fact that it's still weaponless).

In America, Chromedome was no more or less important than any of the other Headmasters, which means that he showed up a few times in the comic books, and in the "Rebirth" three-parter that closed out the original animated series, and otherwise wasn't seen all that much.  In Japan, Chromedome was the nominal Headmasters leader (under Fortress Maximus, true, but Maximus was HUGE, and therefore didn't really go out on missions much), and thus got a LOT more screen time.

Chromedome's transformation to vehicle mode is fairly standard for the time.  Flip the arms back, fold the robot in half (but take the head off first!), rotate the feet a bit, and you're pretty much done.  Like other 1987 Headmasters' Nebulan figures, Stylor can fit into a compartment in vehicle mode to "drive" the vehicle.
Posted by Mark Baker-Wright at 12:00 AM