Transformers Comic Recreation - Marvel #41 - The Battle on the Moon 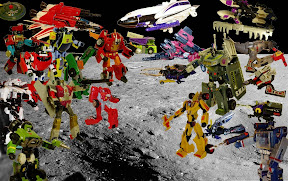 I entered this image into a contest for the official Transformers Club.  We were asked to "Shoot the Ultimate Battle" using actual toys. As I thought through scenes I could do with the toys I had on hand, I remembered the classic battle in issue #41 of the Marvel Transformers comic: "Totaled!" In this issue, Grimlock (then-current leader of the Earthbound Autobots since the death of Optimus Prime) and Fortress Maximus (leader of a faction that came to Earth more recently) meet for the first time, and it doesn't go well. Grimlock challenges Maximus to a duel for leadership. Maximus knows that he is unlikely to win such a duel, having been injured in a previous issue, but Blaster (having his own reasons to want Grimlock defeated) steps up to accept the challenge in Maximus' place. While they fight, the Decepticons take the opportunity to launch a sneak attack on the rest of the Autobots, which brings us to the scene depicted here.

As is probably obvious, this is a Photoshopped image. I used actual NASA photography (NASA images are in the Public Domain) for the moon background, and each toy was individually photographed and layered on to the image to create this composite battle scene. I went into this project with a couple of "ground rules":
I also wanted to include some clear "call-outs" to events in that story:
Sadly, my image was not selected as the winner of that contest. Not even close. The winner was an image that was similar in "space battle" concept, but was not an explicit reference to any specific story I'm aware of. That image was, however, very nicely executed with a combination of Photoshopped effects and "real-world" placement of images on a physical background. I suppose my own entry might have done better if I explained beforehand what the homage was about, as I expect that many people wouldn't "get it" just by looking at it (indeed, many are probably too young to remember when the scene played out in the comic way back when), but since it was important to me to keep my entries anonymous until voting was completed (as I've said on the board, these entries should stand or fall or on their own merits), it is what it is. Congratulations to the winning entry!