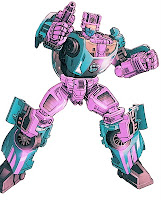 The Generation Two franchise ran from 1993-1995 (depending on what you choose to include), and thus is old enough now that the children that are the intended target audience for Transformers figures all hadn't yet been born when the line gave way to the "Beast Wars" concept.  But for those of us old enough to remember, this was the line that brought Transformers back from the abyss (at least, here in America).  For that fact alone, many of us remember it fondly.  When the folks behind BotCon 2010 announced that the theme for the convention would be "G2: Redux," my interest was piqued, despite the fact that I knew that attending the convention would be impossible for me this year.  When one of the exclusive toys for that convention would be a new G2 Breakdown, I knew immediately that I would need to get the non-attendee set.

The original Breakdown, released in 1986, was part of a merge team called the Stunticons.  Like most merge teams that year, often referred to collectively as "Scramble City" teams, the Stunticons consisted of five members: four smaller figures and one larger "leader" figure.  A large robot could be formed by connecting the four smaller figures to the larger figure as limbs, usually via connector pegs that made up their squarish heads.  These limb figures were interchangeable, allowing one to not only connect the team members in any configuration you liked, but also to be able to swap out team members with figures from other teams should one so choose.  The Seacons were another example of this kind of merge team, which was very popular in the mid-to-late 1980's. 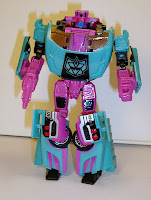 Long-time readers may remember my review of the 2004 G2 Breakdown Action Master from the unofficial BotCon of that year.  In that entry, I referenced the very first BotCon exclusive, from 1994, which was a repaint of the original Breakdown intended for the Generation Two line.  Like the 2004 Action Master, BotCon 2010 Breakdown is a repaint of a Sideswipe figure (in this case, Universe Sideswipe from 2008) with a new head.  Naturally, this means that Breakdown is no longer part of a merge team, but it seems that most of the old '80s "Scramble City" characters have been reissued as non-combining toys in recent years, so this is just par for the course.

One of the features often associated with Generation Two is a preponderance of garish color schemes, and BotCon 2010 Breakdown more or less faithfully reproduces the outlandish scheme of the original Generation Two Breakdown here.  However, it should be noted that there was never any intentionality that Generation Two, as a line, would use bright colors of this kind.  This was simply the trend of the early 1990's, and many Transformers of the late Generation One era were colored this way, as well (and not all Generation Two figures were so outlandish). 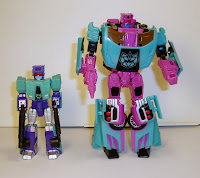 In the entry for Action Master G2 Breakdown, I suggested that I would need to put that figure and this one together side by side, given that they actually bear a greater resemblance to each other than they do to the original G2 Breakdown (being repaints of Sideswipe figures, and thus having a car hood for a chest and all).  Such an opportunity could not be ignored.  Here is that picture of the two figures!
Posted by Mark Baker-Wright at 10:00 AM