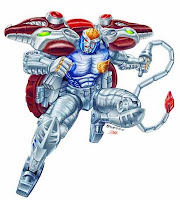 The Beast Wars line started out as a radical departure for the Transformers franchise.  Whereas all previous Transformers toys were decidedly mechanical in nature, the animal forms of the Beast Wars characters were intended to be indistinguishable from a "real" animal that might be found alongside them, in much the same way as it was intended that the original Optimus Prime would supposedly look the same as another truck parked in the same lot.

That lasted for all of about a year. 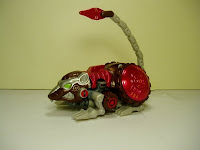 The second year of the Beast Wars line introduced the concept of "Transmetals."  Transmetal characters had beast modes that were mechanical.  Not entirely dissimilar to how the Dinobots and Predacons of Generation One were "animals," yet clearly mechanical animals that could never be confused with, say, a "real" T-Rex or a "real" lion.  Heavily reliant on chromed details, one look Rattrap in "beast mode," for example, quickly conveys the idea of a "metallic" rat. 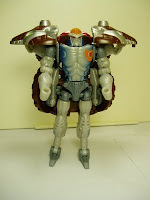 Desiring to maintain the idea that Transformers now had organic elements, however, Transmetals went for an "inside out" concept.  Although the beast modes looked metallic, the robot modes were molded to convey the appearance of musculature, skin, fur, and other "organic" details (apparently including what looks for all the world like intestines on Rattrap, here.  The Transmetal "inside out" concept can't really be blamed for the "exposed brain," through.  For some reason, Rattrap had that from the very beginning.).  The Transmetal toys were also designed without ranged weapons (although the cartoon supplied them for all the Transmetal characters, anyway), giving them only melee weapons--usually ones that could be formed out of parts of their beast mode.  I didn't care for tail-as-weapon last week with Grimlock, and I don't think it's much more practical here, but as before, if you really want to see what that looks like, here you go. 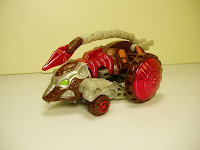 Transmetals also went back to the idea of "vehicles" in Transformers, at least to a degree.  Transmetal toys added in vehicular features like wheels, engines, or wings, so that a "third mode" could be formed that was more or less the same as the regular beast mode, but with these vehicular features deployed.  Presumably, a rat on wheels can scurry faster than a rat on legs!  The Beast Wars cartoon popularly used this mode as a kind of "personal transport" for Dinobot (a Beast Wars character, not to be confused with the team featured last week) to ride on top of.  Back at BotCon 2006, one fan even rigged up a remote control car to fit just underneath Rattrap, so he could fit a Dinobot figure on top of it and drive it up and down while the rest of us were waiting in line.  It was definitely a fun way to pass the time!
Posted by Mark Baker-Wright at 12:00 AM