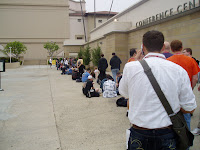 The first order of business on Saturday morning was to get "Weird Al" Yankovic's autograph. Because "Weird Al" is well-known outside of the Transformers fanbase, and because this is the first time he's ever been to a Transformers convention, I knew that the line for this one would be long, so I arranged to arrive about an hour and a half before signing was actually scheduled to start. Even so, there was a considerable number of people who were in line before me (a process made more difficult because there was no readily-visible signage to determine which of three BotCon lines already formed by this time were for the "Weird Al" autographs, and the one I wanted was on the opposite end of the Convention Center!). 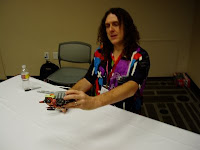 Still, once signing actually started, the line moved along at a respectable clip. This was, of course, because the convention organizers set a rule saying that no posed photos could be taken with "Weird Al" after each autograph. Basically, you could shake his hand, say "hi" and give him the item (they also had a "one item only" rule) to be signed. It was okay to take pictures while "Weird Al" was signing, though. Here he is just having completed the autograph on my Animated Wreck-Gar toy. 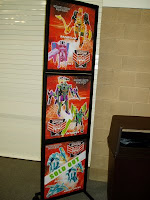 Once that was done, I was able to get back into the dealer room, where I verified that the rumors I'd been hearing were true: the 3 Sweep exclusive set (the only one I didn't already manage to snag for myself, having committed to giving a club member the one I was able to get on my own package) was already sold out. Indeed, they may have been gone by the end of the day Friday. I haven't heard for sure. 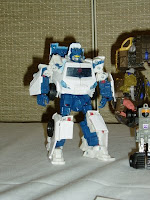 One aspect of the dealer room I neglected to mention last time was the art display. Fans who contributed models and artwork for the convention contest had these items on display in the corner of the dealer room. This "Shattered Glass" Soundwave (Earth version) was part of a larger set, but I liked it enough to want to take a picture of it on its own! You can find other examples of art from these displays here. 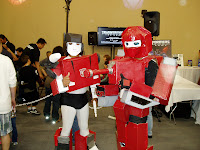 Every year, there are a number of fans who dress up in costume. I am always amazed at the creativity and quality of the costumes worn by fans, and felt that this year's costumes were as good as any I've seen any year. Here's a link to pictures of folks in costume at BotCon. 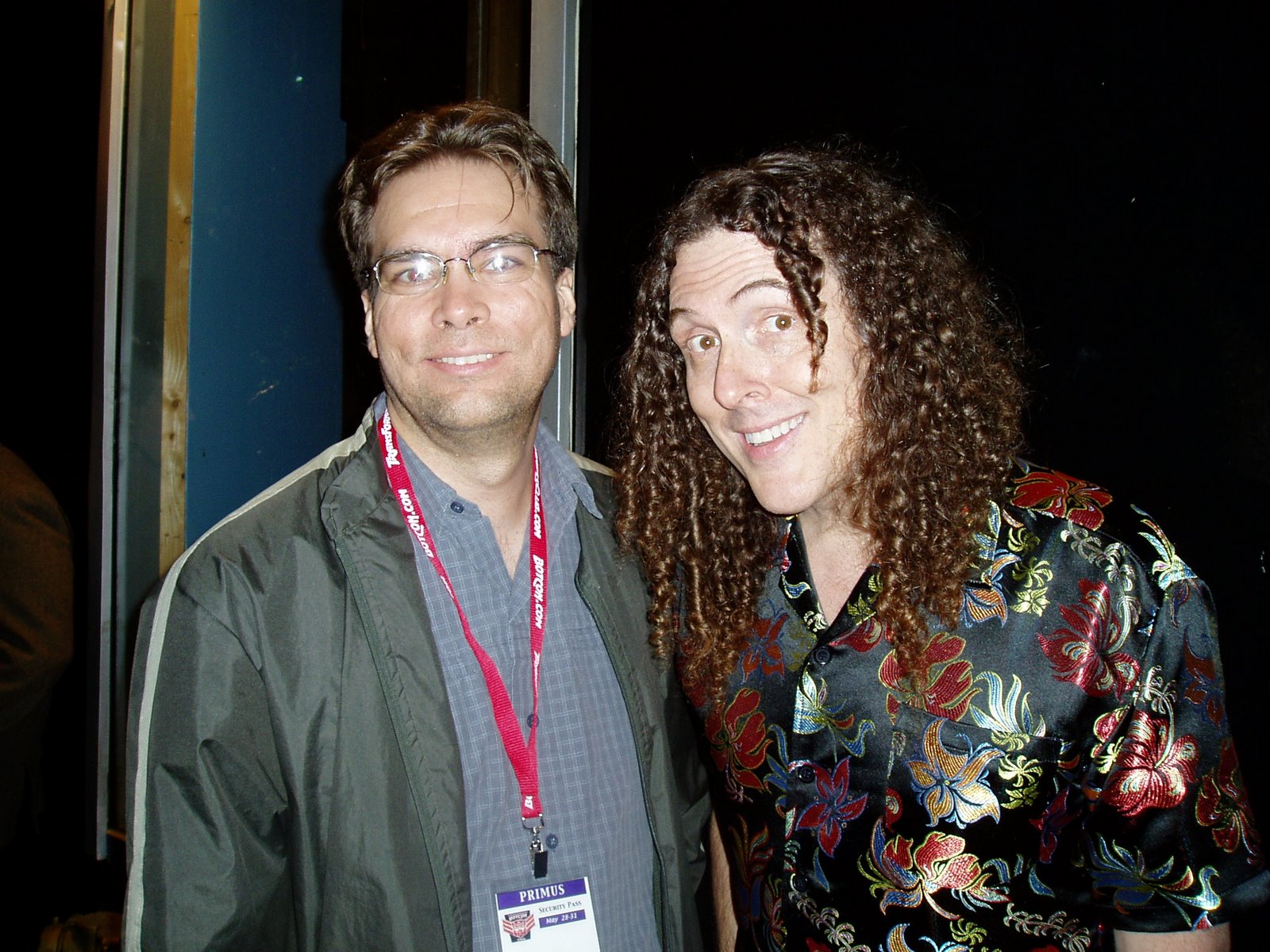 Saturday night was capped off with the party on the Paramount Studios lot. I've got lots of pictures of this, featuring the concert, the actors, the vehicles used for movie Ironhide and Ratchet, and the lot itself, but this is the one I have to include here. We couldn't pose for photos with "Weird Al" at the signing, but it was fair game at the party! This is what I paid that extra "party" fee for! (Oh, yeah, we got to see a couple of short movie clips introduced by Michael Bay.) 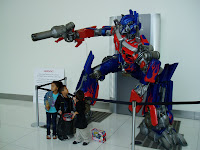 Once attendance was opened up to Walk-In guests (I've joked a bit about the long lines, but these folks had the longest lines of all, from what I could tell), there were lots of kids to be seen at the convention (real troopers, if they had to wait in those lines!). It's all sorts of fun to see kids getting excited about seeing the Optimus Prime statue, and playing with Transformers toys (especially when you can tell that the toy they're playing with so enthusiastically is one from the original era. I'm guessing most of those kids have no idea that the toy they're playing with is more than 3 times older than they are!). This is what Transformers are all about, folks! 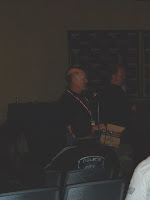 There's not too much to add that's specific to Sunday. More panels, more Walk-Ins, more kids. That's not to say it's "more of the same," exactly, but it's just harder to talk about Sunday in a separate way from the rest of the weekend without retreading ground. Sunday had the Hasbro Designers panel, which didn't allow pictures because they revealed a few toys set for release within the next year or so. Animated fans will be glad to know that there are still some new toys on the way, including Animated Arcee and Animated Rodimus. I was particularly interested to learn that Hasbro will be re-issuing the G1 Insecticons and G1 Perceptor. If the price isn't too unreasonable on those, I'll almost certainly be picking them up in due course. Also, Brian Savage drew the two winners of a free trip to next year's BotCon, but although both winners were apparently local, I wasn't one of them. In any event, I really do recommend checking out the news sites (such as TFW2005. I was able to chat with a few of the folks who run that site while waiting in line to get on the bus for the Paramount party. They're nice guys) for news, and the tons of other pictures I've got posted at Photobucket (photos have since been moved), where I've been trying to fill in captions to describe what's going on to provide some context. You can also see images of the convention (broken up by day) at BotCon.com. Here's one they took with me in it (I'm on the far left).

*Whew!* Although this was my fourth BotCon, this was easily the one in which I was the most involved in going to all the various activities. I was doing BotCon-related activity for five consecutive days, and was on my feet for most of that time! I'm back at work now, more than a little tired, but very happy to have taken the time to enjoy what BotCon had to offer. Starting tomorrow, I'll get to work on featuring each of the convention exclusive toys. I'll handle each toy separately, with the exception of the Sweeps set, which are just repaints of Scourge, which I will do a full feature on. I'll include the Sweeps when talking about him at the end of the week.
Posted by Mark Baker-Wright at 12:00 PM