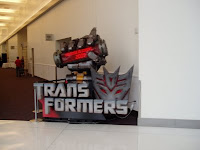 Yesterday, BotCon was finally in full-motion. I arrived about 8:40-ish to get in the line (yes, another long one, but this wasn't so bad) to await the opening of the doors at 9:00 am. It turns out a great many of the people in line were still looking to go to the club store, which I had largely taken care of the night before. So when the doors opened, those of us who were already registered and didn't need to buy anything from the club, and were just there to attend the first forum, were allowed to walk right on past the club store line to head into the forum. 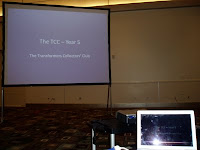 The first forum was about the official Transformers Collectors' Club (TCC), and specifically about the magazine and comics produced for the club and the convention. Although upcoming club exclusives were not yet annouced, Pete Sinclair did tell us that they will announce two club exclusives for 2009 later in the convention. I was privileged to be asked to run the slides for this event (which is why you can see both the computer and the large screen in this shot), and trust that I was able to help things run smoothly. Other items discussed included some behind-the-scenes insights into the club's fiction and just what happened with the naming of the recently completed club exclusive. I'll deal with that more properly later, but for now, it seems safe to nutshell it all into "it's Hasbro's fault!" (they actually said this without actually blaming Hasbro, in a rather professional and classy way, but that's still the way I understood it).

I also poked my head into a bit of the Animated forum, where it was finally officially confirmed that Season 3 is the end of the series. They showed a series of more than dozen short clips animated separately from any actual episodes, containing humorous little vignettes and character bios. I hope these manage to find their way onto an official DVD release, as they were really quite good (the one where Starscream is dreaming would be worth it on its own!). 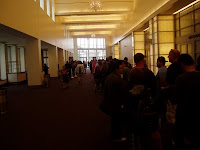 The main attraction of the day was the opening of the Dealer Room. On Friday, the Dealer Room was only open for three hours, but when everything's open to walk-ins on Saturday and Sunday, a lot of the best deals are often already gone, so there's obviously large demand to get in even for this short time. I was joking with my wife later today that I've gotten good at waiting in lines. This one wasn't anything like as bad as it looks, though. Unlike the autograph line on the left, this one pretty much evaporated once the doors to the Dealer Room were opened. 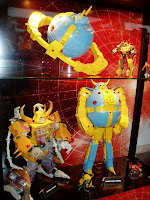 Besides the dealers themselves, there were a number of exhibits in the dealer room worthy of special attention. Here, for example, the originally proposed Unicron toy is displayed alongside the one that was actually made nearly two decades later. 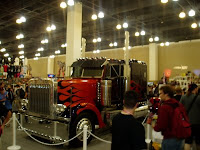 The truck (or a mock-up) used for Optimus Prime in the movies was also on hand, and was a popular photo opportunity.

But this may well be the most surprising find of all, at least for me. I've gone on record as not caring much for the aesthetic of the movie toys. But this one (or two, depending on how you look at it) I found among the upcoming movie toys is one I'll just have to get. A Transformer that turns into an ice cream truck! How cool is that?

I have other Dealer Room photos, but putting them all up here would become unwieldy really fast, so instead, you can see them among my other BotCon 2009 photos over at Photobucket (photos have since been moved to another server).

Most of the special guests make their appearance on Saturday, and the party at Paramount studios should prove to be interesting, as well. However, the party itself doesn't conclude until midnight, so I won't be able to get anything written down here for tomorrow. Instead, I'll cover Saturday's events, as well as any Sunday wrap-up, on Monday.
Posted by Mark Baker-Wright at 12:00 AM