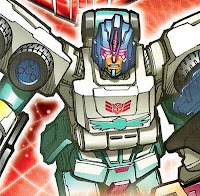 Exclusive toys have always been among the main attractions of BotCon. This year, the set was based around the "Elite Guard" concept that originated in the Transformers: Animated series, although this "Elite Guard" was placed in a G1 setting. Those who pre-registered for the convention could do so while ordering a set of five figures, four of which were the members of this continuity's Elite Guard. Thunderclash is their leader. 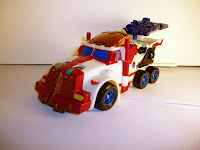 Thunderclash is a repaint of the Energon Rodimus mold (although it has been noted that the plastic colors used are nearly identical to Checkpoint, which was released later in the Energon line), and transforms into a truck cab of indeterminate type. The character's inspiration was a 1992 toy named Thunder Clash (note the space between the words) that was released in the United Kingdom and throughout Europe. The original Thunder Clash is perhaps best known for two things: 1) the mold was later used for Machine Wars Optimus Prime, and 2) the toy's garish color scheme. The BotCon 2009 version attempts to duplicate at least some of that garishness, although I find it interesting to note that most of this is done through paint applications, rather than through plastic colors. None of the reddish colors, for example, are plastic. That's all paint! 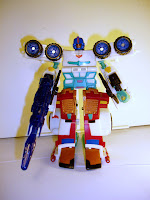 Those reddish hues really come out in robot mode, where nearly half of the mode uses the color. Still, because of the ways that the plastic sprues are broken down (and I actually know this from experience for this particular toy!), to use that color of plastic would have required that the wheels and forearms (for example) be reddish (and covered with black paint) or the torso would have had to be that color (then covered with white paint). All things considered, I'd say that they made a good choice.

As I've already mentioned, this was the mold that was used in last week's customizing class, and although the toys are absolutely identical, in terms of the molds and plastic colors used, having different paint applications (and stickers, in the case of the customization class toy) really can make quite a difference. Here is a shot of the two toys side-by-side.
Posted by Mark Baker-Wright at 12:00 AM