Skyquake is an appropriate counterpart to Thunderclash in a number of ways. Not only were they both leaders in their original incarnations (a role which each has retained in the "Wings of Honor" story), and not only do both have rather loud color schemes, but both Skyquake's and Thunderclash's original toys were used to create Machine Wars figures. The original Skyquake's mold was used was used to create Machine Wars Starscream in 1997. It is perhaps therefore fitting that Skyquake was created from a Starscream mold (the Energon version, the same mold used by Leozack) this time around. 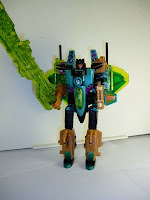 Since Skyquake does use the exact same mold as Leozack, Skyquake has all the same weapons and features, and there's not a lot of point in going over them again. It's become expected for Fun Publications to re-use at least one mold within the exclusives made for a given BotCon. 2005 saw Buzzclaw, Dirge, and the Virulent Clones. 2006 gave us Cheetor and Tigatron. 2007 had three Decepticon jets from the same basic mold (although each had a slight mold variation from each other). And last year's convention offered Jazz and Ricochet. Reusing molds in this way helps keep down costs, so that the convention can offer more exclusive toys without having to charge so much more than they already do. Granted, we've already gotten Scourge and the Sweeps this year, so perhaps yet another mold reuse was unnecessary, but I'm not really complaining.
Posted by Mark Baker-Wright at 12:00 AM