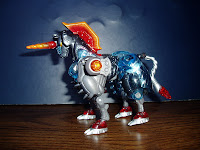 When the Beast Machines toy line was wrapping up, one of the last toys produced for the line was Battle Unicorn (yet another entry from the "unimaginative name department," I know). Partly because Battle Unicorn was near the end of the line, it was not shipped as widely as some of the other toys, and many fans found themselves unable to find Battle Unicorn when it came out.

Although most fans continue to buy their Transformers at the local toy store, an increasing number do their shopping online. This has led to the creation of several online-only toy stores, many of which specialize in Transformers. It is a widely-held belief that people want what they can't have, and since Battle Unicorn was apparently rare, many fans clamored for a way to get it, many even promising to pay premium prices for the rare item. One particular online store, BigBadToyStore.com, announced that they had worked out a deal with Hasbro to get a supply of Battle Unicorns, and the toy practically became a "BigBadToyStore.com exclusive." 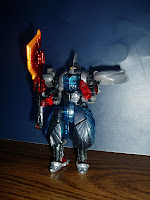 Unfortunately for BBTS, nowhere near as many fans were willing to pay those "premium prices" as BBTS had expected. The price BBTS was charging was admittedly roughly double the price of what Battle Unicorn had sold for at retail, so perhaps it's not too surprising that people had been put off by that (their promises notwithstanding). I'm guilty of some of this, myself. My own specimen came not from BBTS, but from an eBay auction that was ultimately cheaper than BBTS's price (even after accounting for shipping, though in my defense, I never promised to pay those premium prices for this toy). But for whatever reason, BBTS found themselves with a HUGE supply of Battle Unicorns that they couldn't get rid of. In fact, they still have a supply available to this day, despite lowering the price to clearance levels (although I feel sure that I've seen the price even lower than I see when I check these days). If the toy does appeal to you, you can buy it via this link.
Posted by Mark Baker-Wright at 9:15 AM