I've managed to do this weekly feature for more than half a year now without featuring a specimen from the current line of toys: Transformers Animated. Mostly, this is because I have more of an interest in detailing the history of the Transformers line than I do in advertising for currently available toys. However, having spent the past two weeks detailing some of Hasbro's attempts at motorcycle Transformers, Animated Prowl deserves some attention. 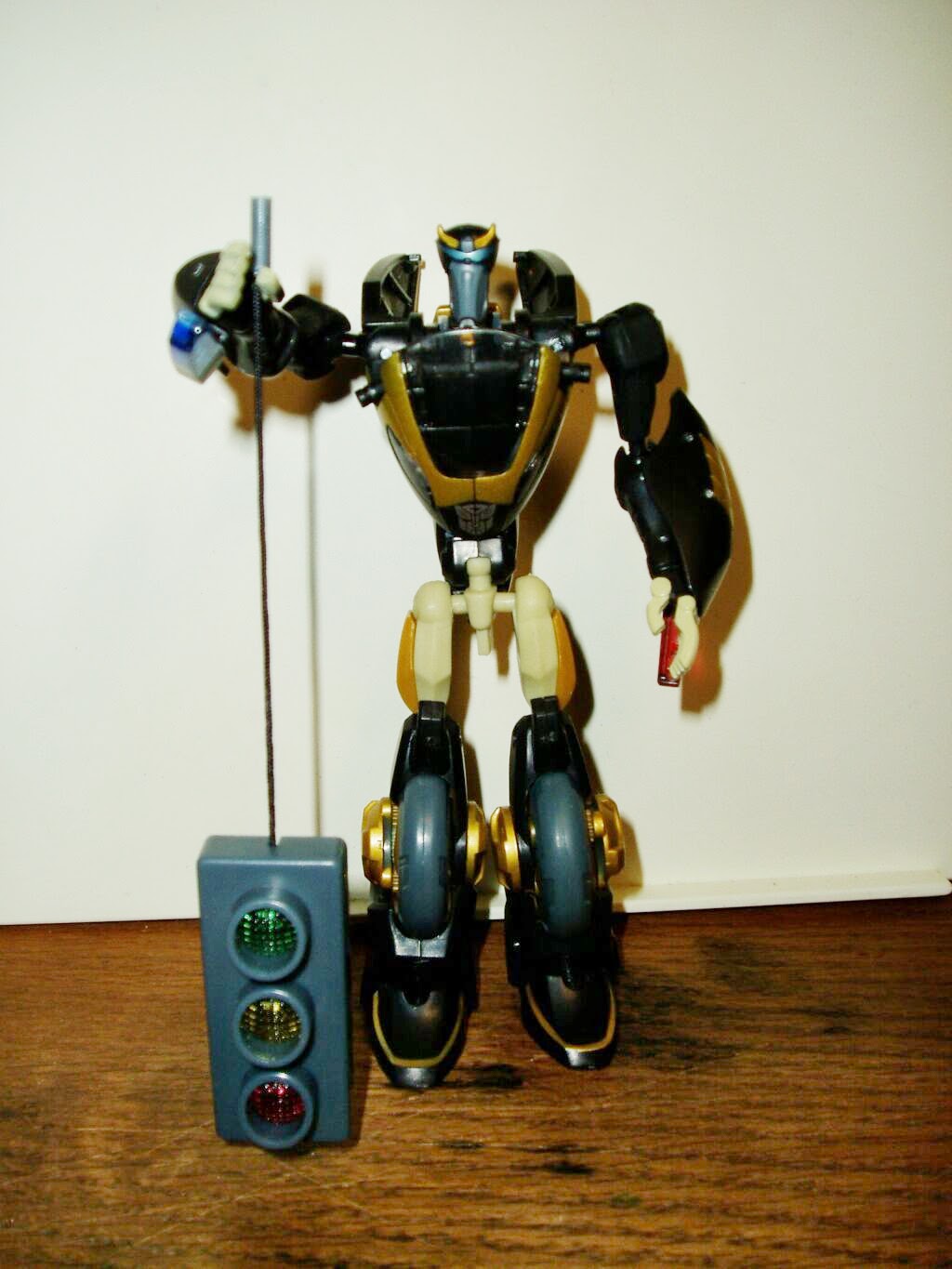 The Animated line has taken a distinctively more stylized approach to designs than other lines in the past. More angles and curves, kind of a pseudo-Japanese-anime approach. In some ways, this makes things easier on the designer, since there's less pressure to make the character look somehow "realistic." The bar for suspension-of-disbelief is placed in another atmosphere entirely. It certainly allows for some of the most cartoon-accurate toys to come along in quite a while, although there are still a few toys that fail to match their cartoon counterpart all that well. Prowl is definitely one of the "winners," though. Not only in terms of cartoon-accuracy, but just in terms of being a decent robot despite the motorcycle alternate mode. In fact, I'd say a person would be hard-pressed to find a motorcycle Transformer with a better robot mode. One does wonder at the inclusion of the traffic light/weapon, though, since it never appears in the cartoon. I've heard it said that it was originally intended to, but I haven't seen the evidence. 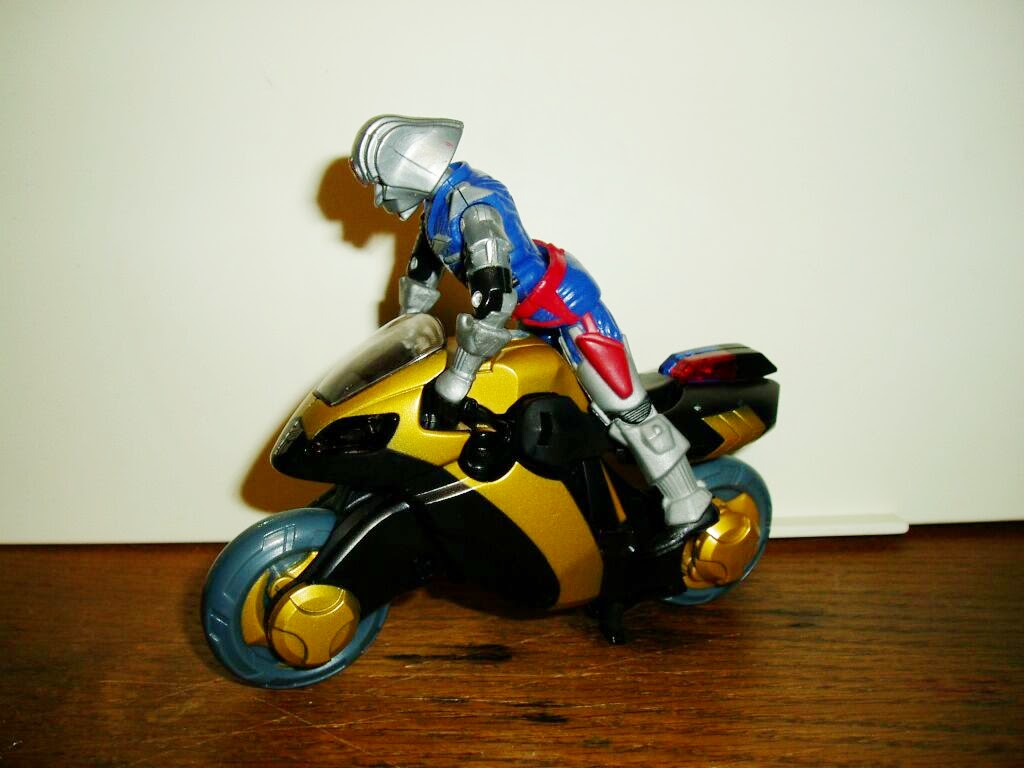 But, in keeping with the other motorcycle reviews thus far, it's time to pull out Cobra Commander again to ask "how well scaled is this motorcycle to allow an existing action figure to ride it?" In my personal opinion, it's not too bad a fit. Not quite right, but passable. Of course, since Cobra Commander is the leader of a ruthless terrorist organization determined to rule the world, it's probably safe to assume that this scene could never actually happen unless Cobra Commander had somehow incapacitated Prowl, a member of the heroic Autobots, to bring him under Cobra control. 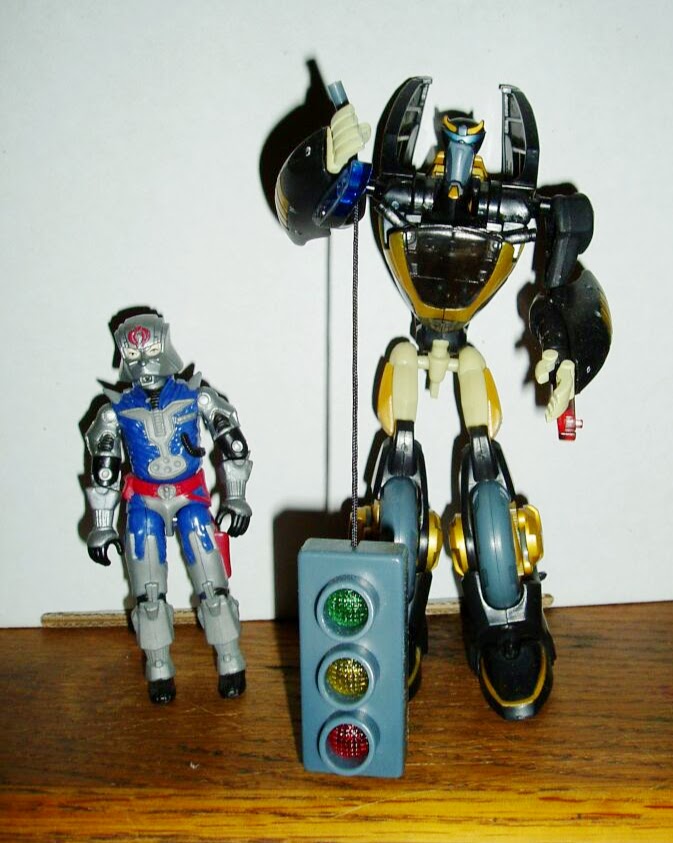 And, although I consider such issues of scale to be an exercise in insanity when it comes to Transformers, we also need to have the figure-to-robot comparison one last time. Prowl's pretty tall. Cobra Commander probably hopes that Prowl is under his control if ever the two of them should meet! But the scale issue is brought into question even by that traffic light. Of course, I don't usually stand close enough to traffic lights to really know how closely I'd measure up to them, so I won't make too firm a judgment on that one. But if the traffic light Mister Rogers used to have in his "neighborhood" home is any indication, this scale's probably not too bad....
Posted by Mark Baker-Wright at 12:00 AM