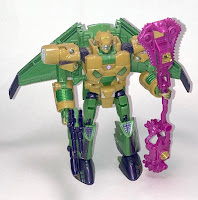 Fun Publications' version of Serpent O.R. was created toward the end of what was called the "Wings" continuity (named for the "Wings of Honor" storyline that kicked it off in BotCon 2009). I've occasionally described the "Wings" continuity as "just like the G1 cartoon continuity, except when it isn't." Referencing the episode "Only Human," Fun Publications suggested that the character of "Old Snake" (who was all-but confirmed to be an elderly Cobra Commander operating in the cartoon-future year of 2005) created Serpent O.R. using the discarded body of one of Scourge's Sweeps (thus explaining the use of the 2010 Generations Scourge mold, which had conveniently been used in 2013 as a humanoid version of Ratbat, whose fanged head nicely gave Serpent O.R. the desired snake-like visage).

While the "Wings" version of Serpent O.R. was, like most of his predecessors, an amalgamation of Earth's greatest strategic minds, this version's backstory included the addition of G.I. Joe leader "Hawk" to the mix, with the result being a creature that was nominally a Decepticon, but with more noble sympathies than might have otherwise been the case. Serpent O.R. proved pivotal in bringing the Cybertronian Wars to a conclusion (at least for a time) after the "Wings" continuity's versions of "Generation Two" and "Machine Wars."

I should make clear that the "Serpent Scepter" held by the Serpent O.R. toy above did not come with Serpent O.R., which was a part of the third "Figure Subscription Service" offered by the Transformers Collectors Club. The staff was created by Fun Publications (and, I believe, Jesse Wittenrich specifically) by taking two Japanese Arms Microns named "Gob" and "Zad" (respectively left and right in the picture here. Note that these are specifically the reddish-purple versions. There are also black versions, not used for the Serpent Scepter). While Arms Microns are designed to combine in many different ways, these two technically don't attach to each other when creating the staff. Rather, the illusion of a combination is created by placing Gob in the top of Serpent O.R.'s fist, while Zad is placed through the fist's bottom. One may see Gob and Zad's intended melee weapon modes via this link. It was definitely an extra effort to add the Serpent Scepter to my Serpent O.R., but I've never regretted it.
Posted by Mark Baker-Wright at 11:00 AM