Before the green tank version of Megatron came out to become the first all-new mold created for Generation Two, the line was populated entirely out of molds created previously. Not all of these were molds from the earliest parts of Transformers history, however. In fact, some of the molds to come out in Generation Two's first year were new to North America, having been used in Europe only a short time previously. Among these previously-European exclusive molds was a set of four small jets called "Skyscorchers" upon their European release. While the "Skyscorcher" name was dropped upon these molds' arrival in America, the toys themselves were unchanged. 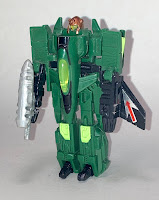 There is some ambiguity as to whether this Eagle Eye, a Decepticon, is the same character as the toy of the same name that was part of the Autobot Micromaster Air Patrol a few years previously. Individual Micromasters didn't get their own personality profiles (at least not until many years later), and the faction-swap would seem to be a clear indicator that this is not the same character, but some Japanese fiction that came out twenty years after this toy's release decided to say that both Eagle Eyes are, indeed, the same being. Even the fact that the original UK release of this toy used a different name entirely ("Hawk") didn't dissuade them! However, I do believe that specific subset of fiction remains the only official fiction to-date to make the claim. If you'd rather see the Skyscorcher and the Micromaster as two different entities that just happen to share the same name, you're free to do so.

The Skyscorchers all shared a common gimmick in that their hand weapons could also attach to the jet mode's undercarriage as radar assemblies (pointing in the opposite direction as the hand weapon). This is a rather simple "gimmick" by modern standards, but prior to this, the ability to ensure that all accessories had specific storage locations in both modes was fairly novel. I should also mention here that this image of Eagle Eye's jet mode has an intentional mistransformation, and two flaps that swing out from the legs to form air intakes in jet mode are held back here, so you can actually see the radar/weapon in place. I feel somewhat justified in this since, although Eagle Eye's transformation instructions do include the step of swinging out those flaps, all of the line art of Eagle Eye's jet mode, when seen in profile, leaves the intakes untransformed and the radar visible, and I doubt that most people, if seeing the jet mode transformed this way, would ever suspect it was incorrect if this wasn't pointed out.

We'll see a couple of the other Skyscorchers in the coming weeks. For now, I'd like to extend an invitation (or a reminder, if you're already listening, and thank you!) to catch the next episode of Not Your Father's Autobot: A Transformers: Generation 2 Comic Book Podcast, which will drop not this coming Sunday, but the next (on Valentine's Day, February 14th). You can subscribe via the RSS feed, or just come back here to the blog on the 14th.

We'll be discussing the first issue of the comic (having covered a preview story from several issues of G.I. Joe last month). Be sure to check in to learn how to enter for a chance to win a copy of issue #1 of the Transformers: Generation 2 comic book for yourself!
Posted by Mark Baker-Wright at 10:30 AM