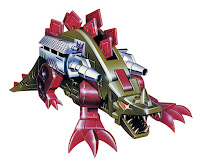 Nearly eight years ago, I did a feature on Overkill, a former dinosaur cassette that had at the time been recently homaged via a Classics Grimlock repaint. I mentioned at the time that the original version of Overkill was packaged alongside another dinosaur cassette named Slugfest (all G1 cassettes were packaged in pairs, at least in the US), but since my intention at that time was to feature the two Overkill toys, Slugfest got very little attention. It's time to fix that.

Slugfest and Overkill were among the final cassette molds released in the original Transformers line, and the last such molds created that didn't combine to form a larger robot (as molds like Grand Slam and Raindance did). Given the general popularity of dinosaurs, I'm actually kind of surprised it took so long. Slugfest's Tech Specs describe him as being more than a little paranoid, exploding in hysterical rage whenever he thinks someone's talking about him, often as a result of listening to the very messages recorded in his cassette form and ironically resulting in the destruction of those recordings. One wonders if (in-fiction) "cassette" might not have been the best choice for alternate mode for this soldier (nor "messenger" the best function).

Like the Dinobot Snarl before him, Slugfest transforms into a Stegosaurus. Also like Snarl before him, Slugfest borrows from a popular theory regarding Stegosaurus's plates by having an in-fiction solar-powered ability, in this case reflected in the detailing of Slugfest's "vibro cannons," which are indeed said to be solar-powered in Slugfest's Tech Specs.

In the Overkill entry I wrote all those years ago, I commented that while Slugfest was the only one of this original dino-cassette pair to ever be reissued (in 2009), only Overkill had ever received an update via a new toy. Apparently, Overkill did indeed get a G1 reissue in 2009, which I apparently missed when writing that old entry in mid-2010, but while Slugfest has still never received an update to this day (I count Shattered Glass Slugfest as a different character), Overkill has since received another update through the recent Titans Return line (admittedly under a different name this time around). This time, Overkill... err, Overboard... is a "Titan Master" head (that is to say, a Headmaster head, but Hasbro didn't want to use that term this time around) that comes with a dinosaur-body accessory. So here's Slugfest and Overkill together again. I wonder how all these updates that Overkill's been getting affect Slugfest's paranoia. Better not tell him....
Posted by Mark Baker-Wright at 9:00 AM