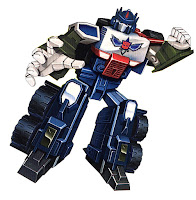 With Toys R Us still in the process of closing its doors forever (at least in the US. Stores in other countries have found buyers, some of whom even look to be retaining the "Toys R Us" name), I had occasion to recall the closure of KB Toys yet again recently when I discovered Machine Wars Optimus Prime for sale at a local store and decided to add it to my collection. As long-time fans already know, Machine Wars was a short-lived line that was exclusive to KB. I discuss the line in a post I wrote in preparation for BotCon 2013, which featured a Machine Wars theme, so I won't repeat all that here. Instead, I'll focus on what made this version of Optimus Prime distinctive.

Like all Machine Wars toys, the mold used for Machine Wars Optimus Prime was originally created with another line in mind. This version of Optimus Prime is especially unusual, if perhaps not quite unique among Optimus Prime toys, in that its mold wasn't even created with Optimus Prime in mind, although more casual fans could be forgiven for not knowing this at first glance, as the vehicle mode undeniably fits the established pattern for Optimus Prime toys. Nonetheless, this mold was originally created for an unrelated character, Thunder Clash, and released in 1992 in Europe (and later, Japan) during the period after the original US line had ended, before Generation Two resuscitated the line.

While the Thunder Clash mold certainly evokes Optimus Prime in many ways, being a tractor-trailer with a cab that becomes a robot and a trailer that becomes some kind of a battle station, the mold's non-Prime intentions are especially apparent when you look at the robot mode's mouth (i.e, he actually has one!). The package art (reproduced above) hides this fact, but of course, that art isn't really of this mold in the first place, being merely touched-up art of Generation Two Laser Optimus Prime (compare with this art and see for yourself). It's really a bit of a pity, as Thunder Clash has his own artwork that could have been recolored, but either Hasbro really wanted to give Prime's package art a faceplate, or they didn't want the battle station to dominate so much. 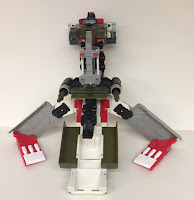 Machine Wars Optimus Prime does have a few mold changes from Thunder Clash, especially in battle station mode, but these were pretty much all dictated by the need to meet US safety standards, and not out of any concern to make the toy more Prime-like. One unintentional difference between this toy and Thunder Clash is that Thunder Clash suffers from what is commonly called "gold plastic syndrome," meaning that its feet and gun are known to be very brittle and prone to breaking. Machine Wars Optimus Prime does not have this problem. 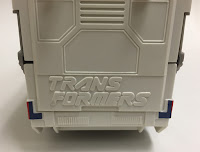 One final footnote regards an aspect of this toy I never knew about until I had it in my hands. The back of the trailer features a molded-in Transformers logo. I do not know if any mold prior to this one had such a feature, but I find this especially interesting because it's an old logo, even by the standards of the mold's original use as Thunder Clash. While the logo used on this toy was established in the later half of the US line, Thunder Clash and his European pre-G2 brethren used a different logo (see Thunder Clash's package and compare the "A" and the "N" in that logo, for example, and the differences become clear), and the Machine Wars toys used a variation of the logo created for Generation Two. It just goes to show that even 20-year old toys like this one still hold the power to surprise.
Posted by Mark Baker-Wright at 9:00 AM