Longtime readers of this blog will be well-familiar with the fact that Fun Publications, the company that ran BotCon for the last decade-plus of its existence, lost the license to run official Transformers conventions after BotCon 2016, when Hasbro decided that they wanted to consolidate their licenses and run fan conventions on their own. The result was the first HasCon in September 2017, more of a trade show or exposition than a convention in the traditional sense, but at any rate devoted to all of Hasbro's properties, not just Transformers. That said, the fact that Transformers is one of Hasbro's most lucrative brands ensured that, when exclusives for HasCon were being planned, there'd be at least one Transformers exclusive in the mix.

I honestly don't know if the Optimus Prime Converting Power Bank was explicitly designed with HasCon in mind, but it holds the distinction of being the only fully converting, all-new mold Transformers exclusive for a convention to date, and excepting for the online HasbroToyShop (which has long carried so-called "convention exclusives," especially San Diego Comic-Con exclusives, after the convention is over), HasCon 2017 remains the only venue at which this mold has been made available.

The concept of a Transformers figure changing from a robot into a piece of working technical equipment isn't entirely new. TakaraTomy's Device Label line featured USB drives, hubs, and a working computer mouse, and even before that, the Music Label line gave us working earphones, iPod docking bays, and MP3 players (one of which was the Soundwave figure that ultimately was repurposed into the first incarnation of Shattered Glass Soundwave). This Optimus Prime figure is the first time that Hasbro seems to have undertaken such a figure on their own initiative, however.* 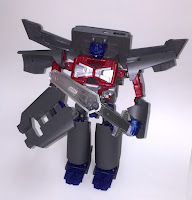 Figures like this are obviously created more for the novelty of the alternate mode than to create an action figure that a child is likely to fight battles with. That said, the various flat panels unfold at enough angles to give a reasonably decent (and three-dimensional!) Optimus Prime figure, although I'm not sure that a "shield" with so many holes in it makes even a little sense as an accessory. I guess they had to put that panel somewhere. 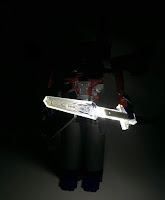 The fact that this figure is essentially a mobile battery does allow for a fun gimmick, in that if you connect the sword to the USB port at the top of the figure, you can light up the sword. Alternately, you can rearrange the sword, wing panels, and "shield" (I just have to put that one in scare quotes...) to form what the instructions say are a mobile phone stand (below). It's certainly true that I can rest my phone on it without the assembly collapsing, but I really can't see using this stand for any actual length of time. 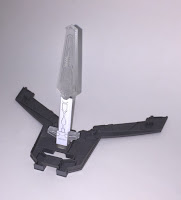 Unlike BotCon, which was held every year, it seems that HasCon will be held less frequently, with the second HasCon not taking place until 2019. One assumes that it, too, will feature Transformers exclusive toys, but only time will tell if another all-new mold like this one will be offered. If this becomes a common thing, it would certainly set HasCon above BotCon in at least that respect.

But I'd still prefer a dedicated Transformers convention....

*I do note that the packaging for the Optimus Prime Converting Power Bank says that the figure was "manufactured under license from TOMY Company, Ltd." I therefore find it doubly curious that TakaraTomy (as the TOMY company is known within Japan) hasn't released their own version yet. The package also refers to Australian distribution, but I remain unaware of any Australian release of this mold, much less this figure.
Posted by Mark Baker-Wright at 9:00 AM