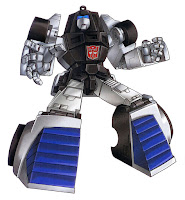 The year 2002 was a significant one in the history of BotCon. It marked the first year that BotCon was truly the official Transformers convention, with full backing by Hasbro beyond the mere inclusion of exclusive toys. It also saw a marked increase in the sheer number of exclusives available that year. I've already featured three of the four exclusives available at BotCon 2002 on this blog (Tap-Out, Glyph, and CatSCAN, I do not... yet?... own the fourth: Cyclonus). Yet BotCon 2002 was only part of the story. There was also a BotCon in Europe that year: BotCon Europe MMII (The TFWiki refers to the convention in more traditional terms: "BotCon Europe 2002." I consider the version with the Roman numerals, found on contemporary advertising and its website, to be correct, because it's less easily explained). BotCon Europe MMII was by no means the first BotCon held outside the US, but it proved to be the last. 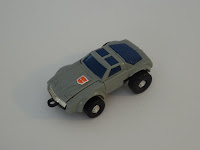 While other non-US BotCons were organized by various people who used the BotCon name, BotCon Europe MMII was organized by 3H Productions, Inc., the same people who organized BotCon 2002. Thus, it should come as no surprise that the exclusive for BotCon Europe MMII, Rook, was a similar concept to Tap-Out and Glyph, being a repaint of a G1 Minicar keychain offered by Fun4All, in this case, G1 Windcharger.

I'm not aware that Rook was given a bio at the time of his release (as Tap-Out and Glyph did), but by the following year, Rook was firmly established as being a Cybertronian news reporter. This was a fairly unusual role for a Transformer at the time, and indeed I think it took IDW comics, and specifically their post-war era, to come up with another Transformer reporter of this kind.

I've already detailed how both Tap-Out and Glyph were produced in huge numbers, and Rook was done the same way, with 3000 units produced for each. This had the upshot of meaning that, rather than being one of the hardest exclusives to get (being exclusive to a small convention on another continent), Rook ended up becoming the first BotCon exclusive to be officially offered to non-attendees, and thus one of the most widely accessible exclusives of all. Indeed, I gather that 3H had such trouble recouping their expenses on these exclusives, coupled with the new responsibilities of being officially-sanctioned by Hasbro, that this was probably one of the reasons for their troubles in the next couple of years, which meant that the BotCon name wasn't used for the official Transformers conventions in 2003 and 2004, and culminating in the transfer of the license to Fun Publications by 2005. Since then, while there have occasionally been Transformers conventions outside the US, none have used the BotCon name, and none have featured official Transformers-branded exclusives. Still, with that water well under the bridge by now, if you want to find any of these little guys on eBay, you should still be able to do so for a reasonable price, and I recommend adding them to your collection. 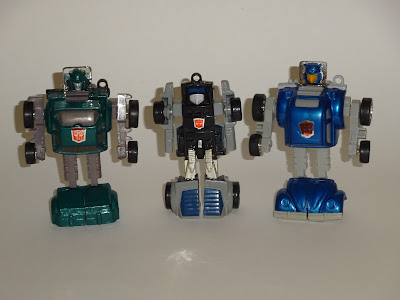