Having won Hasbro's recent fan poll, Impactor (and Mirage) will be given new toys in the upcoming Transformers line, which Hasbro has confusingly decided to call "War for Cybertron." This isn't the first time that Hasbro has re-used an old name for a current toyline (the most famous, if debatably not the first, was the 2015 Robots in Disguise line), but it gets more difficult for those of us who try to keep all this straight with each successive re-use. At the time of this writing, the new line hasn't yet come out, and indeed no molds for it have even been revealed, so all we can do is speculate on the basis of the few fragments of information we currently have. So we'll start with those....

The name "War for Cybertron" was first used in 2010 for a video game set in the early days of the conflict between the Autobots and Decepticons. Hasbro released a few toys to coincide with it without actually using the name "War for Cybertron" at the time (as they will be doing with the new line). Since this era was well before the Transformers had arrived on Earth, the game designers came up with new alternative modes for the characters, occasionally taking inspiration from "Cybertronian" modes seen in the 1980s cartoon, but usually giving them at least a mild update. 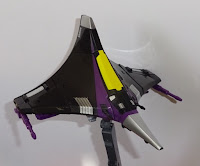 This is where today's featured toy comes in. "Prankstor" is a third-party stand-in for Skywarp. The first episodes of the cartoon gave the Decepticons destined for F-15 jet modes a distinctive pyramidal pre-earth form commonly referred to in fan circles as a "tetrajet." While the original "War for Cybertron" Skywarp (and its toy) took some significant liberties with the "tetrajet" design, Prankstor, a toy made by a company called "Impossible Toys," indeed sought to do the impossible by making a transforming version of the mode we actually saw on TV as kids. 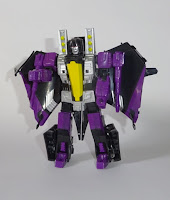 I wish that I could say that the attempt was an unqualified success, but I really just can't. While the vehicle mold is all-but perfect as the tetrajet given physical form, it achieves only a broad semblance of Skywarp's robot mode (which, of course, was originally designed to result from transforming an entirely differently-shaped earth jet). Adding to Prankstor's problems are molding issues that mean it doesn't even do what it was designed to do as well as it might. The transformation is extremely difficult to get right (and the instructions are no help at all), and the result is a misshapen troll of a figure (see especially the comparison with "Classics" Skywarp below). The face, in particular, is pretty ugly, and there's really very little excuse for it. To add insult to injury (or, perhaps in this case, injury to insult), I found that the wings are rather brittle, and a small part of the wing snapped off on one side during transformation. Given the difficulties of transforming this toy (I only did so for the second time ever while taking these pictures, after which I changed it back to tetrajet mode for what will probably be its final resting position), I've opted not to even bother to repair it.

But back to the "War for Cybertron" concept. The designers in charge of the upcoming line have said that they are again looking to the 1980s cartoon for inspiration. While I don't know that they've mentioned the "tetrajet" concept, it's hard to imagine that it won't be featured in some way. I expect we'll see something that pays homage to the original tetrajet (yet different from the previous "War for Cybertron" toy) without slavishly copying it. I'm sure that it can't help but be a better toy than Prankstor turned out to be.
Posted by Mark Baker-Wright at 9:00 AM