As the show itself regularly announced, "it's the crossword game you've played all your life, but never quite like this!" Scrabble has certainly not been the only game show to spin out of a popular pre-existing board game, but I daresay that it was one of the more successful, lasting for nearly six years in its original run (and earning a second run a few years later that admittedly only lasted a few months). Oddly enough, the game was changed so significantly from the original Scrabble that a separately-sold "TV" version was pretty much a necessity if one was to try to play this version at home. Just having a regular Scrabble set just wouldn't cut it. 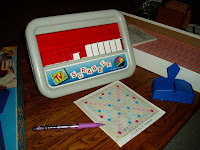 I actually put off getting this game when it was originally on the market, because I just couldn't see how the game board I'd seen advertised, a red-filter affair of the type not uncommon in game show board games (I've already featured one example here on the blog with Jeopardy!), could possibly be used to emulate the feel of the show, which doesn't use any similar prop. Yet once I finally got this version off of an eBay auction several years ago and finally had a chance to look through the instructions, I found that it actually does so remarkably well.

The "game board" is actually a paper pad with approximation of the Scrabble board on each page, and the game card (once inserted in the red-filter frame) tells you what letter you're building off of and how many letters are in the word (and where the letter you're building from falls within that word). This is all very much like the game show, but the real genius is how the red-filter frame emulates the "tiles" of the show, by utilizing a two-step reveal process. Pick two tiles, and move the white tab down half-way to reveal the letters you can choose from. Then, once you've picked a letter to see if it's in the word, move the tab the rest of the way down to reveal either the numerical position of the letter, or a "stopper" asterisk letting you know that the letter isn't in the word and that you must forfeit your turn. The short-sentence "clues" to each word also emulate the excessively punny feel of the show quite nicely, and I'm especially impressed with how the board game evokes the "Scrabble Sprint" without a timer by turning it into a two-player buzz-in competitive round.

I actually had a chance to play this game with my nephews (both too young to have ever seen the show, of course, since its last new episode aired in 1993) this past weekend, and they seemed to enjoy it. I found that I only had a couple of minor quibbles. One involves the scoring mechanism. Although the "bonuses" for the colored spaces on the Scrabble board reflect the game rules reasonably well (although not completely, as this version differentiates between light and dark colored spaces, whereas the game show itself didn't), the number of points awarded for getting the word itself strikes me as somewhat inconsistent, and possibly even random. The second criticism is related, in that I found myself occasionally misreading the clues for how many letters were in a word, using the number intended for points rather than the number intended to tell me how long the word was. This led to some minor embarrassments, but thankfully my nephews were quite forgiving whenever this happened.
Posted by Mark Baker-Wright at 9:30 PM