New Year's is upon us, so why not do a feature on the Transformers version of "Father Time" himself? Of course, I'm referring to Vector Prime. Vector Prime is a member of "the Thirteen." In theory, these are the 13 original Transformers as created by Primus, and each of these Transformers was given a special power to help defend the universe. In Vector Prime's case, that power is mastery over the space-time continuum. 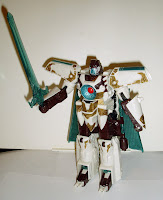 When Vector Prime was introduced, the idea was that these 13 Transformers were unique in the Transformers multiverse. That is, although the Optimus Prime of the Animated cartoon is a different Optimus Prime than any of the Generation One Optimus Primes (and there are several of those), any "Vector Prime" you see is supposed to be the same entity as this one (who appeared in the Cybertron cartoon). However, recent revelations in preparation for the current cartoon (Transformers: Prime), coupled with important plot points in the Michael Bay live-action movies, suggest that this concept has already been revised, so take that with a grain of salt.

Vector Prime's alternate mode strikes me as a cross between the Star Wars X-Wing Fighter and the TIE Figher, although here you see how Hasbro's best intentions in regard to safety unfortunately result in toys that don't hold up over time very well. The wings of the vehicle mold are made with a very soft plastic, and most specimens come out of their original packages with visible warping. Mine has suffered even more from being put in storage for the past few years. Takara's version uses a harder plastic, which doesn't have this problem. 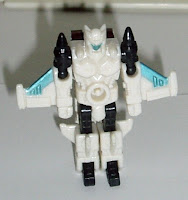 Vector Prime comes with a few accessories. You've probably already noticed the big sword in the picture above, but none of the shots I've used yet have shown Vector Prime's Mini-Con: Safeguard. There's really not to much I can say about him, as like most Mini-Cons, he's not given a whole lot of personality.

Safeguard also turns into a spaceship of some kind, with a front end that clearly doubles as a weapon. This is at least in part so you could plant Safeguard on Vector Prime's arm to use as an arm cannon... 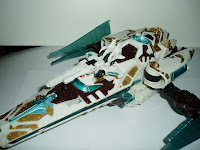 ... or on Vector Prime's spacecraft mode. There is one other accessory that isn't shown in any of these pictures: Vector Prime's special Cyber Planet Key. Cyber keys served a similar function in the Cybertron line as Mini-Cons did in the Armada line, in that they tend to unlock special features of the larger robot. In Vector Prime's case, this is limited to some sound effects, which don't photograph especially well, and I'm not really into Transformers with electronics, anyway, so I tend to ignore that feature.

Obviously, this is the last entry I'll be doing for 2011. As I'm writing this, I'm preparing to report to a courthouse in Los Angeles for potential jury duty. I may get through the experience without actually being selected to serve on a trial and thus be free for another year, or I may end up serving on a jury that takes up my time and attention for a while. Between that and my already uncertain schedule, I don't know when the next post will be, but I'll try not to take too long. See you in 2012!
Posted by Mark Baker-Wright at 12:00 AM