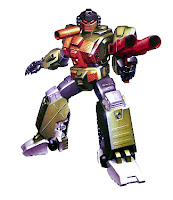 This entry has been a long time in coming.

A little less than five years ago, I announced the completion of my collection of American-released Action Master figures with the acquisition of Gutcruncher. I made that claim by the standard of having all of the actual figures themselves, even though I didn't then—and still don't to this day—actually have all of the accessories that came with each figure if one was to buy them at retail in the early 1990s. Although I was able to get all of the accessories for Gutcruncher when I procured the Gutcruncher figure, they came with none of the stickers applied. At the end of my original Gutcruncher post, I commented that I had contacted the folks at Reprolabels about getting a set of Gutcruncher labels made. Such a set was finally made available a few months ago, and I made sure to order my set!

Oddly enough, the Reprolabels set for Gutcruncher is not an exact replica of the original Gutcruncher set, as is the case with most of the G1 sets Reprolabels makes. Rather, the Gutcruncher set is among the "upgrade sets," which go beyond the G1 originals and provide different details (FYI, the Gutcruncher upgrade set is X18). In this case, metallic foil was used for certain details rather than the predominately red color scheme of the original stickers. While I'm still surprised to see an "upgrade" set created before a "regular" one, it's a minor complaint, and after waiting so many years, I wasn't going to quibble over minor details, and the metallic look really does work nicely on the "Stratotronic Jet."

Believe it or not, when I got Gutcruncher, I took the picture of the figure itself for the original blog entry, and put the Stratotronic Jet accessory in storage immediately thereafter, without ever having transformed it into the missile base with tank and drone. The pictures seen here represent the first-ever transformation of this toy that I've owned for nearly half a decade now!
Posted by Mark Baker-Wright at 12:00 AM