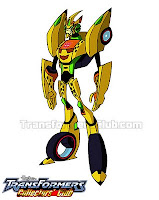 With the Los Angeles area facing potential traffic mayhem this weekend, I tried to work through which Transformer I hadn't already featured (but which I had available) might be an appropriate match to the situation.  I decided that the recent Transformers club exclusive toy, Animated "TransTech" Cheetor, deserved some attention.  Of course, I doubt that Cheetor would be any better at handling a traffic jam than any other Transformer.  Indeed, he'd probably cause them more than most.

Cheetor uses the Animated Blurr mold, which itself is said to have been designed to pay homage to the Cheetor design that would have been part of the Transtech line that would have followed the Beast Machines franchise.  Of course, Transtech was cancelled, and the Robots in Disguise line was created (almost entirely using pre-existing molds) to give Hasbro a few years to come up with something new (with the Armada line). 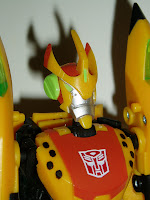 Cheetor sports a remolded head, which itself has been a source of some controversy among fans, as it just doesn't convey the character (as seen in the two-dimensional images used to promote the toy) as well as might be hoped.  At least one factor that contributes to this is the lack of black outline around the eyes and "face mask."  If you were fortunate enough to be able to buy Cheetor at BotCon 2011 (and, unlike me, still had the toy with you when discovering the relevant booth in the dealer room), you could have had your Cheetor toy detailed by a skilled customizer using a magic marker, better conveying the Cheetor appearance that many fans were hoping that the figure would achieve.

As of the time of this writing, I'm still not entirely sure how many Cheetor toys were produced.  The folks behind the club have promised to reveal this number once the toys have sold out, but unlike G2 Ramjet (which was put up for pre-order at the same time as Cheetor), Cheetor is still available at the club store, so help a datasheet coordinator out and buy your Cheetor today!
Posted by Mark Baker-Wright at 6:30 AM