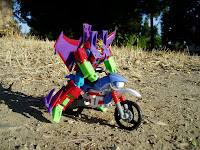 This past weekend, the BotCon Twitter account announced a photo contest to celebrate their 3000th follower, encouraging fans to submit a picture of their favorite Transformer in some summer activity.  Naturally, I had to make sure that at least one of my entries (we were allowed up to three) featured the recent BotCon Action Master Thundercracker.  The entry I chose to submit, featuring Thundercracker on a dirt bike (Energon High Wire, in fact), may be seen at left. 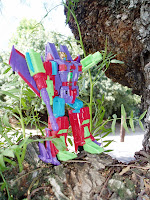 But I also took a series of other pictures of Thundercracker in various summer activities that I ultimately didn't send to the contest (I'll show off the other two pictures that made the cut, both of which feature other characters, at a later point).  My first thought was to take pictures of Thundercracker climbing a tree.  I took quite a few pictures with this concept, with Thundercracker at various stages of climbing.  Some actually look like he might be flying upward, which struck me as cheating (although the figure actually is supported by its hand and foot).  Not that Thundercracker would be opposed to cheating, of course, but I decided that it didn't convey the "summer activity" I was looking for. 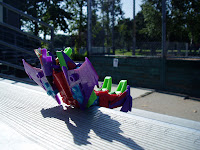 Another idea I had was to feature Thundercracker watching a ball game.  Unfortunately, there wasn't anyone actually playing, and various shots of Thundercracker sitting on bleachers just didn't seem very interesting. 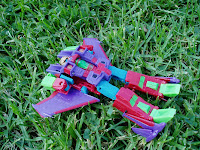 Finally, I thought of what could arguably be the definitive summer pastime--just laying in the grass.  Ultimately, I still went with the "dirt bike" shot as being more interesting, but I really do like this picture, which I think conveys the sense of relaxation it was intended to rather nicely.
Posted by Mark Baker-Wright at 12:00 AM