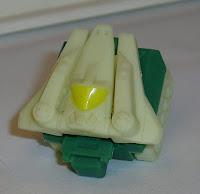 The fan base for Transformers is large enough these days that there are a number of companies out there that, while not officially sanctioned by either Hasbro or TakaraTomy, create products of obvious interest to Transformers fans.  One very recent example of this is the first of what promises to be a new line of "Headrobots" figures.  These small figures are designed to replace the official heads of Headmasters toys made in the 1980's. 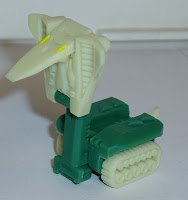 The concept takes its origin from a line of extremely rare figures produced by Takara in 1987.  Instead of turning into small robots, these heads turned into various animals, such as a lion or a tiger.  These figures are SO rare that even sites dedicated to cataloging Transformers toys haven't always been able to secure images (this one's supposed to turn into an elephant, but the only image I've ever seen comes from the Takara catalog.  If you happen to have an actual specimen of the toy, the folks the TF Wiki and TFU.info would love to get some pictures from you!).  The concept for a cobra head figure was actually created way back then, but no such figure was ever created.  The Headrobots folks have decided to take these concepts (including a few others that Takara came up with), tweak them just a bit, and create actual figures of them for the first time. 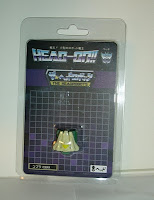 The toy comes in packaging that intentionally homages the original Transformers packaging, but carefully avoids any actual Hasbro- or Takara-owned trademarks.  Even the insignia that looks like a Decepticon symbol, at first glance, is actually a new design.  The packaging is also designed to be able to open and close without damage, so you can take the toy out, play with it, and then put it back in the package for display, and no one should be able to tell that it isn't a "mint, unopened" sample.

The real fun of this little toy comes from being able to put it on the bodies of any 1980's era Headmaster toys you might have lying around.  Here is the Headrobot on my Chromedome toy.  The back of the Headrobot package suggests that these guys are evil characters who have the ability to attach themselves to transtectors (official Takara-speak for the bodies of Headmaster and similar toys) in order to control them.  Not all that dissimilar from the Transformers: Animated character "Headmaster" (who is otherwise largely unrelated to the 1980's Headmaster concept).

The Headrobot guys really paid attention to detail.  They even designed this figure in such a way that, if you open up the stats meter found on the vintage toys, it will display stats unique to the cobra figure.  I really appreciate that they've homaged this concept so fully.  These figures can be found at the usual Transformers-related online shops.  I got mine from TFSource.com.
Posted by Mark Baker-Wright at 3:00 PM