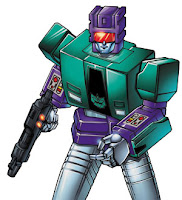 2004 was a difficult year in the history of Transformers conventions.  Although BotCon had developed a reputation as the largest and best-known convention devoted to the franchise, the name was phased out in the previous year as the convention took on official status with Hasbro and the person then in charge of organizing the convention moved to separate the company from the folks who had started the "BotCon" concept.  Although not all the facts about exactly what happened, and why, are entirely clear even today, it is obvious that this was a very contentious decision that caused a lot of hurt feelings and it is not too uncommon to hear words of blame tossed in one direction or another whenever the topic is brought up, even today.  Without getting into those painful details, it is enough to say that one result was that, in 2004, there were two significant conventions.  One, called the "Official Transformers Collectors Convention" because, well, it was, and another unofficial convention, run by the Hartman brothers, the original BotCon organizers, which retained the "BotCon" name. 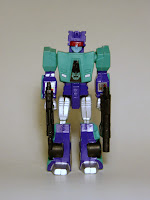 Because 2004 was the 10th anniversary of the original BotCon, the organizers wanted to do something special for an exclusive, but no longer having official ties to Hasbro, their options were limited.  Ultimately, the Hartmans teamed up with Joe Toscano (who had been creating custom Action Masters for a few years by that time) and Chip Wallace (who at the time was running a custom stickers site) to create an unofficial Action Master to homage the original BotCon exclusive from 1994, G2 Breakdown.  Using the never-released-in-the-US Action Master Sideswipe as the base from which to create a mold, and creating a new head which more closely resembled Breakdown, this toy nicely captures the feel of the character despite having features that the original Breakdown toy never had (most notably the Lamborghini hood as a chest) .

One of the featured guests at BotCon 2004 was Peter Cullen, who provided the voice of Optimus Prime in the original Transformers cartoon (and who has since come back to provide Prime's voice for the Michael Bay live-action Transformers theatrical movies).  As I understand it, BotCon 2004 was held in Pasadena specifically so that Cullen (who lives in the Los Angeles area) could participate.  Since I work in Pasadena, that naturally worked out great for me, and so I made arrangements to attend.  It was actually announced sometime after the initial registration period that an (as yet unrevealed) exclusive would be provided to those who paid a little bit extra to attend a breakfast on the morning the convention began.  Although I wasn't keen on spending extra money, the promise of an exclusive was too much to turn down, and so I signed up for that, too.  As a result, I was able to get one of the few Action Master G2 Breakdowns made, and I don't regret paying to attend the breakfast one bit.

The folks who created AM G2 Breakdown also went to the trouble of providing packaging for the figure which, like the Headrobot Cobra, had to be careful to avoid using any of the trademarks then in use by Hasbro.  You can find pictures of the package, as well as a detailed "making of the figure" feature, at this site.  The package even included a set of "Tech Specs" that duplicated the style used in Generation Two.  What it didn't include, oddly enough, was a set of the "Power Plans" that were characteristically on all (real) Action Master figures.  Naturally, I couldn't allow this oversight to go unaddressed, so when I went home the evening after I picked up my figure, I put some together.  I even made sure to print out a copy to give to the Hartmans (I assume they got it, but I wasn't able to hand it to them in person, but rather to one of the staff of the convention).

Of course, "BotCon" is once again the name of the official Transformers convention, and the theme for this year's BotCon is "Generation Two: Redux."  It was revealed just this past weekend that one of the figures in the box set is a new Generation Two Breakdown figure!  Because this toy uses the mold created for the "Universe 2.0" Sideswipe figure, it actually looks more like the "unofficial" Action Master than it does the original Generation Two Breakdown, but I, for one, am not complaining.  My only concern right now is scraping up the money to afford the new toy, so it can go next to the Action Master I already have!