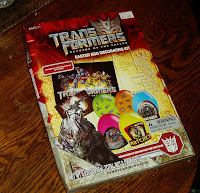 This Easter season, I decided that, since it's been a few years since I've actually colored any Easter Eggs, and since Transformers products really do seem to be everywhere these days, I'd go ahead and get the "Transformers Easter Egg Decorating Kit" recently on the market (since it's now after Easter, if you're able to find this set, I'm willing to bet you can get a really good price on it!).  Here's my assessment.

Most of the contents of the kit are pretty standard for Easter Egg kits these days.  You've got stickers, little tablets of dye, a wire for dipping the eggs into the dye (and for fishing them out again afterward), and paper holders for so few of the eggs you're going to make that I always wonder why they bother.  The Transformers kit also comes with a little mini-poster (what am I supposed to do with this?  I suppose if I were still in grade school, I could stick it in my locker) and a "trading card."  Apparently, there are four of these (what, are people supposed to buy so many kits that they stand a chance of getting all four of these blind-packed things?).  I got Ravage.

Having already hard-boiled 18 eggs (of which only 17 survived to be colored), I started work.  The instructions suggest adding a few teaspoons of vinegar to the water if you want bolder colors on all but one of the colors they give you tablets for.  The exception, the pink tablet, they are very explicit about saying it goes in water only.  I assume there's something about the chemicals in that one that either makes the color not especially strong when put in acid, or it creates some other undesirable effect.  I didn't tempt fate to find out, but since not all of the other tablets look like the colors they'll be once you put them in water (green is especially confusing beforehand), I would have hoped that they'd label which tablet is which if they're going to make such a big deal about treating one differently.  Suffice it to say, I guessed correctly, and pink is the only one I didn't put in a vinegar solution.

Knowing that this was going to take some time, I stuck in a DVD to watch/listen to while I worked (sorry, Transformers fans, I went with Bugs Bunny instead.  Seemed appropriate for Easter).  There's not an exact science to this kind of thing, but I basically left an egg in each color for about 10 minutes (or about 1-and-a-half Bugs Bunny cartoons) before taking them out to dry. 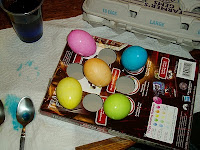 Like most commercially-bought Easter Egg kits, the box was designed to poke out holes in the back to let your eggs sit while they dry (also like most such kits, they suggest using the circles punched out in this process as spinny-disks.  I didn't bother with that).  Basically, I only used up to five of the nine spaces they gave us at any one time.  Thus, I minimized the danger of knocking one egg into another before they were dry.  Eggs stayed on this tray for more-or-less the same 10-minute cycle as the next set of eggs would spend sitting in the dye. 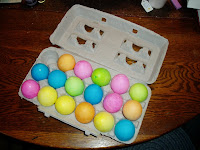 Of course, I had to move those eggs out of way before the ones in the dye could come out, and this is where I put them.  Basically, once an egg was dry to the touch, it would be moved here until I was done dying all of the eggs.  I then watched a few more Bugs Bunny cartoons (I have five volumes of the "Golden Collection" DVDs on hand, but only needed the Bugs Bunny-devoted disk of the first two to get through this whole project) before moving on to the stickers and stands. 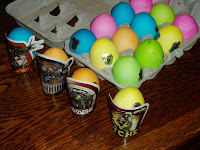 Stands like these are increasingly standard fare in Easter Egg kits, but I really think this is where these folks are stingy in the extreme.  There's enough dye here to handle literally dozens of eggs (I almost felt I was doing too little by getting only 18 eggs, but someone's going to have eat all these eventually!), yet they give you only four stands!  Come on, folks!  I'm already paying several dollars to get this stuff, the least you can do is print out a few more pieces of paper!  Anyway, given the Transformers theme, I did my best to match up stickers to the character for each stand (not that you can tell here), and even matching stickers to egg color to some extent, although this is obviously just a matter of personal preference. 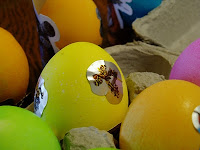 I'm not especially thrilled with the stickers, either.  I don't think a single one of them laid flat on the egg.  They've all got little wrinkles like this!  Give me some decals, folks!

All in all, this was fun to do once, but I don't expect I'll be spending money on this again next year (assuming they even release such a Transformers-themed set again next year).
Posted by Mark Baker-Wright at 2:00 AM