The Hard Life of Professor Martin Stein: Part One 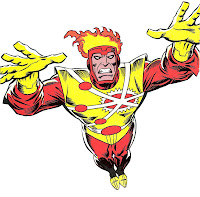 My favorite comic book hero isn't Superman, or Batman, or Spider-Man, but a hero created for DC Comics in the 1970's named Firestorm. Firestorm was (comparatively, if not utterly) unique among the roster of superheros in that he wasn't just one person, but the fusion of two separate people. When the character was introduced, these two people were high school student Ron Raymond and Professor Martin Stein. Firestorm has been through a number of changes over the years, but until fairly recently, one or both of these men could be argued to have been a part of the Firestorm persona. When current character Jason Rusch took over the role of Firestorm a few years ago, and Ron Raymond was killed off, there was a tremendous outcry, which hasn't entirely died down to this day. This article isn't really about Raymond, though. It's about Stein, and how he's gone through some hardships that rival the difficulties of even Marvel's favorite whipping boy, Peter Parker.

When we first meet Professor Stein, we learn that he is the winner of a Nobel Prize, and he is attempting to prove to the world that nuclear power can be a safe source of energy by opening a completely automated and fail-safe nuclear power plant. We never get the chance to learn whether or not the plant truly is safe (even in the fictional universe of DC Comics), as the plant falls victim to multiple levels of sabotage, and is destroyed when a bomb placed by a violent anti-nuke activist goes off. One "happy" result of this explosion is the creation of Firestorm, as Stein and Raymond are fused into one being, but because Professor Stein was unconscious at the time of Firestorm's "birth," his persona is passive to Raymond's active control. This has the added side effect of causing Stein to be unable to remember his actions within Firestorm when Raymond allows the two of them to separate to their civilian identities and, frightened by these unexplained "blackouts," Stein develops a drinking problem.

Although the drinking problem is eventually confronted, and Stein quits this self-destructive behavior (and he eventually gains the ability to remember his experiences during his time as Firestorm), this is just the beginning of Stein's problems. The very action of becoming Firestorm is a constant source of difficulty--if Raymond summons the fusion when Stein is not physically present, Stein simply disappears from wherever he happens to be at the time, causing Stein to have to come up with many awkward explanations for his unexplained absences. This has the further effect of making it difficult for Stein to hold down a job, his "unreliability" being coupled with rumors arising out of the destruction of his nuclear power plant.

Stein's love life is a mess, too. One of his former students turns out be a psychotic with an unrequited crush on him, and she ultimately becomes one of Firestorm's first major enemies. Stein's ex-wife turns out to be a leader of "the 2000 Committee," a shadowy organization with the goal of overthrowing the US government by the year 2000 (this was back in the 1980's when the year 2000 was still a hard-to-imagine future...). There have been a few other attempts at romance, but even when they don't end tragically, they never seem to last very long. 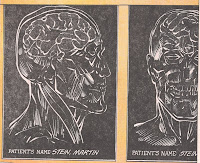 All of this pales in comparison to the eventual discovery of a tumor growing inside Stein's brain. This tumor is deemed inoperable, and Stein is given less than a year to live.

But, as it happens, all this is only the beginning. I'll be back with more of the trials and tribulations of Professor Martin Stein next Monday.


Does what you see here interest you? Subscribe to this feed for regular updates!
Posted by Mark Baker-Wright at 12:00 AM