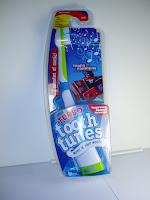 While shopping at the 99 Cent Store this weekend, I came upon this Transformers-themed toothbrush. Although it's a bit of an offbeat item, I decided that, for only about a dollar, it was worth adding to the collection. The Tooth Tunes line of toothbrushes are designed to encourage kids to brush their teeth for the full two minutes suggested by dentists. The idea is that the brush will play music of some kind that (theoretically) can only be heard while the child is brushing. After two minutes of continuous brushing has elapsed, the music will end.

Tooth Tunes, like Transformers themselves, are marketed by Hasbro, so the fact that Hasbro took advantage of owning the Transformers property to engage in some additional cross-promotion isn't really a surprise.

Despite being battery operated, this isn't an electric toothbrush in the usual sense. Basically, it's just a manual toothbrush that plays music if you use it right. Although the Generation One Optimus Prime on the package, the theme that is played on this brush is the theme to the Cybertron cartoon. There are some Optimus Prime phrases intermixed within the theme tune, and although when I used the brush, I could barely hear them enough to be sure, I'm guessing these were from the Cybertron cartoon, as well, as opposed to Peter Cullen (the voice of Generation One Prime).

My experience with the brush is no doubt colored by the fact that I picked up the brush at the 99 Cents Store, which means that some other store hadn't been able to sell it for a while. In principle, you're supposed to hear the theme playing for two minutes while brushing, but it seemed to me that the theme was restarting at random intervals, and I got bored long before the two minutes would have passed. I think the batteries may have run down while the brush sat on the shelves for so many months. Since the batteries aren't replaceable, I couldn't put in fresh batteries to see if there was any discernible difference.

Assuming that my inability to get the music to play properly the whole way through isn't the common experience of kids everywhere, my main gripe with this product is that it doesn't have a replaceable head. As an adult, I'm sure I care about this kind of thing more than a child would. I expect that a child would probably have long since gotten bored with brushing his/her teeth to the Transformers theme by the time the brush head has worn out, and so making the head replaceable would serve no purpose. Much better to encourage the kid to buy another of the many Tooth Tunes products out there. The fact that the batteries that come with the brush aren't replaceable would also seem to support this assumption.

But I doubt that I'll be using this brush on my teeth again, anyway, as I have a much better electric toothbrush that's not designed for people a quarter of my age. Basically, it will just be an unusual addition to the collection.
Posted by Mark Baker-Wright at 12:00 AM