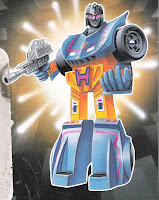 After the original Transformers toy line ended (in America) in the early 90's, it seemed like the Transformers franchise was dead forever. Not only didn't I know at the time that the franchise would resurface only a couple of years later in the form of Generation Two, but I didn't know that in some parts of the world, such as Europe, the Transformers line never stopped at all. When Hasbro in the US started the Generation Two line, this enabled them to relaunch the line with a minimum of domestic risk: the first year's worth of toys (except for Megatron) were either repaints of toys previously released in America in the 1980's, or toys that had previously only been released in Europe (and Australia) as part of the ongoing Transformers line. Skram was one of these "European" toys. 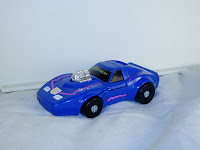 Released in the European/Australian line in 1993 as an "Axelerator" (with slightly different coloring), Skram's US release later that same year was labeled simply as an "Autobot Car" (or the even less impressive "Small Autobot Car," depending on who you talk to). The toy is smaller than most "basic" toys released in recent years, but a little larger than "Legends"-sized toys. Its most distinctive feature (shared by other "Axelerators") is that the engine block exposed in vehicle mode becomes the weapon in robot mode. 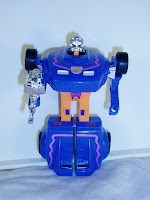 Skram really didn't appear in any fiction in the US during the original Generation Two line, even though the Marvel G2 comic did (eventually) showcase some of the all-new G2 characters. He did get a couple of cameo appearances in the UK comic of the time, but it was left to the current Transformers comic publisher, IDW, to actually use Skram to any degree. Even there, he's mostly been a background character, but I'm definitely glad to see that such obscure G2 characters aren't being ignored entirely.
Posted by Mark Baker-Wright at 12:00 AM