From time to time, Hasbro used to do promotions to encourage folks to buy certain Transformers toys. I've mentioned mail-order promotions before, but on a few occasions, the promotion was some extra "something" packed in with the toy you were actually buying. In 1987, this extra "something" was a decoy. A decoy was a small piece of rubber molded into the shape of some Transformers character. Decoys were originally made available in Japan for use with board games, and also sold in sets by themselves. In America, they were only included with the carded Transformers toys, as opposed to toys sold in boxes, which were generally larger and more expensive. In 1987, this meant the Throttlebots and nearly all of the then-available combiner team limbs, but only those toys, could be found packaged with a decoy. 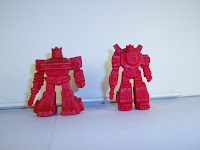 For the most part, Autobots were molded in red, and Decepticons were molded in purple, in keeping with the usual color of their faction symbols. However, there are a few examples of red-colored Decepticon decoys out there. Sadly, I don't have any of those (and, if I did, I likely would have sold them a while ago, as they're apparently worth quite a lot of money).

The decoys also came with a small comic strip, giving a very basic story. Oddly enough, although this comic (and the list on the other side) said that "each Transformer has his own decoy," pretty much all of the decoys were of characters that were no longer being sold as full toys (and Ultra Magnus, explicitly seen as a decoy in the comic, wasn't an available decoy in the US at all!). 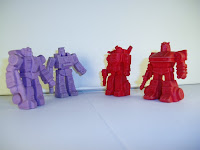 Given that there were more than 50 decoys available, I have to imagine that just about anyone who has collected a complete set has done so off of the secondary market, since there were only about 30 different toys that decoys might be found packaged with, and although the decoys weren't blind-packed (that is, you could clearly see what decoy you were getting before you bought the toy), some were rather difficult to find, and that's not even accounting for the red Decepticons!

For those who care, the decoys featured in the images here are Scrapper, Bonecrusher, Wheeljack and Jazz.