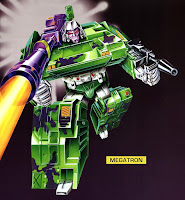 For two full years, there were no Transformers in the United States. The comic had been canceled. No new toys were appearing on the toy store shelves. Despite the words of Simon Furman in the final letter column of the Marvel Comic: "It never ends!", it seemed that the line was dead forever. (Note: The line never actually stopped production in the UK and elsewhere, but in those days before widespread Internet communication, those of us in the US didn't realize that.)

Then, at Christmastime, the seemingly impossible happened. Transformers were back! In what was being called "Generation Two," Transformers were coming back to the toy stores. It wasn't much. Just recolors of then-decade-old molds at first. Truly new designs didn't come around for several months. But this was still more than I had dared imagine possible at that point in time. I pretty much accused my brother of lying when he first told me about it. (Sorry, Nick!) Most of the first new designs were tiny cars and planes, which I didn't get at the time (and even those, I later learned, had been made for the UK line in those years when there was nothing in the US). The first new mold-design of note was the new version of Decepticon leader Megatron. Megatron had been notably absent from the first ("old mold") G2 Transformers. This was because toy safety laws and sentiments had changed in America since 1984, making it either illegal or business suicide (depending on exact location) to sell a toy that resembled a realistic weapon. This meant that a Walther P-38 Megatron toy was no longer an option for Hasbro. If the character was to make an appearance in "Generation Two," it would have to be in a new form. That new form was a large green tank. The change was explained in a few issues of the Marvel G.I. Joe comic released prior to an all-new "Generation Two" Transformers comic. Megatron, having survived a crash-landing on Earth at the end of the original comic series, sought the help of Cobra, the enemies of the G.I. Joe team. In exchange for alien technology, Cobra gave Megatron a systems upgrade and repaired body.

Although the toy has a fairly simplistic transformation by modern standards, it also has a few extra gimmicks. The tank turret actually fires projectiles, and there is a sound chip in the toy that makes several appropriate noises if you do certain actions. Most notably, if you push down on Megatron's head in robot mode, a voice cries out "Megatron attack!" which, actually, is a pretty nonsensical thing for a character to say. Most people don't refer to themselves in the third-person! Also, the voice sounds absolutely nothing like the voice of Megatron we had come to recognize from the 80's cartoon. Still, it's a nifty enough gimmick. There have been a few similar sound/voice chips in Transformers toys in the years since, and they've pretty much never actually gotten the proper voice actor, unless you count the Optimus Prime helmet that came out with last year's movie, and even then you had the buy the right version of the helmet!*

But I digress. This toy is one of the highlights of the short "Generation Two" period. Next week, I'll show off one of the others.

*No, I don't count BotCon 2001 Arcee. That voice chip wasn't even a part of the figure itself, but only it's box!
Posted by Mark Baker-Wright at 7:00 AM