Back when I did 30th anniversary entries on all of the original series of Transformers characters, I covered Trailbreaker, but used a more modern toy rather than his original, and find myself surprised to not have covered the original toy at all before now. Since I discussed the (relatively few) distinctives of Trailbreaker's character in my previous entry, I'll focus instead on the story of how I came upon the specific toy and brought it to its current state. 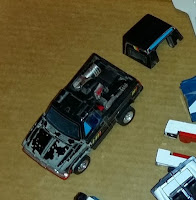 I acquired my specimen through Brian Kilby of Radio Free Cybertron, who was coordinating a sale of toys previously owned by co-host J.D. Church, who had recently passed away, in an effort to help Church's widow (longtime readers may recall that I also got CatSCAN at this time). Unlike CatSCAN, I didn't buy Trailbreaker specifically, but rather it was included with a group of loose toys advertised as a "Bag o' broken TFs and Gobots." Trailbreaker was, in fact, mostly complete, although he had indeed seen better days.

Despite owning this figure for six years now, I still haven't done everything to rehabilitate this figure that I might prove able to do, but even with my limited skills, I've been able to restore much of Trailbreaker's intended appearance. Besides paint, reproduction labels from Toyhax make a world of difference. 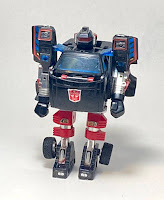 While I've been able to add fists to Trailbreaker over the years, the figure is still missing nearly all of his weaponry, but it is at least more or less complete as a robot. I've been able to apply floor wax to many of the joints, so he is finally able to stand upright long enough for photos such as this one, but the figure remains very loose, and his head falls behind his back very easily. As such, I tend to keep this figure displayed in vehicle mode most of the time.

I remain grateful for the opportunity Brian and his RFC colleagues provided to add yet another G1 figure to my collection, and hope that J.D. would be pleased to see one his figures (mostly) restored.