Ten years ago, I celebrated the then-40th anniversary of the Apollo 11 moon landing in two ways: with this post discussing the moon landing itself, and with this post featuring the then-two existing forms of the Autobot Cosmos. Now, it's the 50th anniversary of that historic event approaching. I don't have much new to say about the moon landing itself, (except perhaps to note that my prediction about the three astronauts that participated in that mission has proven sadly accurate with the passing of Neil Armstrong in 2012), but another Cosmos figure has been made in the intervening years, and this seems like a great opportunity to feature it.

The reason for featuring Cosmos in connection with the moon landing, then and now, is because his alternate mode is a flying saucer, and that mode has changed only in minor ways throughout the various iterations of the character seen thus far. The most obvious addition with this 2013 release of the character is the additional figure. This is Payload, who keeps with the "space vehicle" theme of Cosmos by turning into a space shuttle. 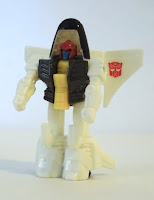 Payload, himself, seems to be based on the Micromaster Combiner character "Blast Master," and the robot modes do share some details, not to mention the basic color scheme. But it should be noted that Blast Master only turned into the back half of a space shuttle (he came with another robot, named "Phaser," who formed the other half), so whether or not Payload is the same guy is a question I leave to others. 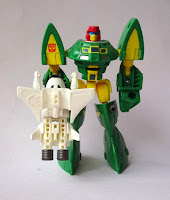 Payload isn't just an additional space-guy for Cosmos to hang around with, however. He also turns into a weapon for Cosmos to use (they weren't actually calling them "Targetmasters" at this point in time). Sadly, this partnership seems to have been short-lived. This version of Cosmos was re-released (with minor deco changes) just a few years later as part of the Titans Return line, but this time without Payload tagging along. It has been suggested that Hasbro made this move because it was determined that the 2013 version (coming as it did at the end of the "Thrilling 30" line of toys) was difficult for many collectors to locate. That may well be true, but it was even more true for the 2009 Universe toy, and they never bothered to reissue that!
BONUS ENTRY - Astrostar v. 2

Many years ago, I featured a custom I made out of a Generation One Cosmos, which I dubbed "Astrostar." Despite Hasbro's concerns regarding "Thrilling 30" Cosmos's perceived rarity, I had no trouble tracking down an extra, which I repainted along the same lines as my earlier custom.

This redeco proved more difficult than the original, probably due to the fact that this mold is more complex than the original Cosmos, but I'm still fairly pleased with the result. The silver paint is by no means as even as the green plastic of Cosmos, but the intention was always to depict a saucer with an "unpainted" sheer metal look, so I explain this in my head as showing the wear and tear of space flight more readily than Cosmos's green.

The main reason for leaving the yellow parts unpainted (both on this toy and on the original Astrostar) was so that the toy could still transform with minimal risk of paint damage. That said, I did discover that this mold is a bit less forgiving where the joints all join together, and even the small amount of silver paint that comes into contact with other parts here does mean that the seams don't fit together quite as smoothly. But, hey, if the "wear and tear of space flight" explanation worked before, I'm happy to use it again here.