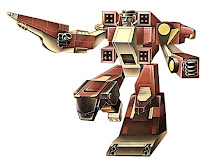 As more and more collectors of Transformers and other transforming robot toys enter into adulthood, a vibrant third-party market has arisen to provide a wider variety of product than Hasbro and/or TakaraTomy have been able to provide on their own. While it is true that some of these products play fast and loose with international intellectual property laws, there are nonetheless quite a few third-party products out there that, while clearly intended to appeal to fans of Transformers toys, are nonetheless very much their own thing: homages without actually violating anyone's trademarks and/or copyrights. Glacialord, a combiner released by a company called FansProject, was especially ambitious in this regard. 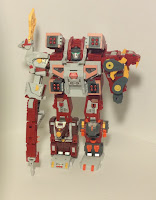 Glacialord was created to appear as if it were an actual toy from the 1980s, and specifically attempts to replicate the basic look and feel of the "Scramble City" combiners (Piranacon and RID Ruination are my collection's best examples of Transformers "Scramble City" combiners, but note that both of these are actually redecos that came out well after the 80s. I do have some components of other "Scramble City" combiners that are actually from the 80s, but not full teams). In fact, all of Glacialord's components are compatible with "Scramble City" components. But Glacialord isn't just a 1980s homage. It also incorporates several features that modern collectors may be familiar with, but which weren't present on authentic 1980s toys, in keeping with its stated "Retro-Future" theme. For example, Glacialord's weapon is formed by combining several weapons from its component robots (Ruination, which came out in 2001, also has this feature, but the Combaticons that originally used those molds in the 1980s did not).

Glacialord is the combined form of five robots that, collectively, are called the "Glacialbots." From left to right, these are Razorspike, Megazero, Tusker, Fangro, and Tailclub. Some sites and early Fans Project publicity suggest that Tusker is the leader of this group, and this is certainly what one would expect following the "Scramble City" pattern. However, a sticker booklet put out by FansProject (itself an homage to similar booklets from the 1980s. I used to own the Transformers: The Movie sticker album many years ago) tells us that Megazero is, in fact, the actual leader, and that he simply allows others to believe that Tusker is. In another example of a feature common to modern toys, but unusual among toys from the 1980s, each robot has weapons and/or accessories that can be fully incorporated into its other modes. No kibble to have to store off to the side here!

Members of combiner teams almost always share some unifying theme. Piranacon was composed of sea creatures, for example. The Glacialbots are all prehistoric mammals. I have to confess, I'd never even heard of a couple of these, such as the "megacero" (which forms the basis of Megazero's name), but some Internet research turned up information on all of them. 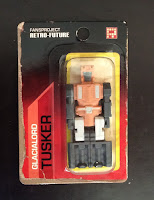 Yet another feature exhibited by the Glacialbots (that original G1 combiners lacked) is the addition of those little figures you see riding on top of the beast-modes in the image above. These are called "Solerons," and they are a kind of cross between a Headmaster and a Powermaster (especially using the Japanese-continuity interpretation of both, where the smaller robot is the "real" character, which uses the larger robot body like a suit of armor. FansProject even uses the same word, "transtector," to describe the larger robot). As you'll see on the limb components' robot modes, the head of those robots is simply that of the Soleron. The Solerons were packaged separately within the larger box for each toy. 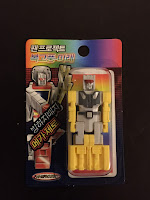 Don't let that wear on the edges fool you. The Glacialbot packages were intentionally made to look weathered and aged, to further the idea that these were really toys from the 1980s that we'd simply forgotten about. The exception to the "intentional weathering" is Megazero, whose package was actually done in a completely different style, as if it were the Korean version of the figure. FansProject even came up with a story suggesting that the original shipment was lost at sea, and that they had to use the Korean versions instead. Truly, the creators of these toys had some fun creating this combiner and its marketing. 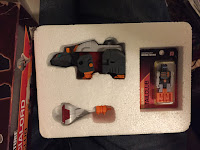 The set's attention to retro detail even extended to the foam packaging inserts, instruction booklets, and sticker sheets, although I don't quite understand why most of the sticker sheets came with some pieces already taken off of the sheet and applied to the toy! Personally, I wish they'd gone ahead and finished the job. While the instruction booklets are otherwise extremely helpful (much more so than a lot of current Hasbro toys), they fail to include placement instructions for the stickers. It's a minor gripe that doesn't detract much from the overall enjoyment of the set, but I would still have appreciated clarity.

For all of the love that went into the Glacialord set, I'm not sure that it was a good seller for FansProject. Like most third-party toys, the components (generally sold separately, but you could buy them all at once as a set if you chose) went for pretty high prices when they first came out, and I don't know that enough fans were willing to pay so much, as I was able to find quite a few stores offering them for significant discounts later on. That said, if you can find this set for a good price, I really do recommend picking it up.
Posted by Mark Baker-Wright at 9:00 AM