Everyone talks about the toys you can buy exclusive to every BotCon.  Some folks complain about the high prices, which isn't any surprise, given the price tags of about $300 for the main box set (5 toys) and about $100 for each of the souvenir sets (2 toys each).  But surprisingly little is said about the stuff one can get for free at the convention.  Well, there's usually discussion about the "attendee freebie" which is given to folks who bought the $300 sets and attended the convention.  This year, that toy is Fisitron, and it really is a pretty cool toy.  But there were a lot of other potential freebies, as well, that don't get so much buzz. This review is by no means exhaustive, but I can at least show off a few things. 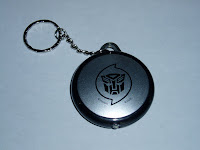 This keychain/flashlight, for example, came from the folks promoting "The Hub," the new cable channel co-owned by Hasbro and Discovery.  I got this by spinning a wheel they had on display (visible to the left in this image) and apparently landing on the slot that awards free keychains (as opposed to whatever the other slots were for). 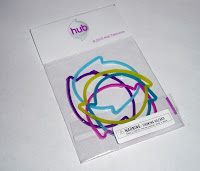 The folks at the Hub were giving away other stuff, too.  I got these "Hub-shaped" rubber bands just for passing by the booth later in the convention (I wouldn't be surprised to learn that these were a prize at the wheel, as well, but I don't know that for a fact).

A very popular giveaway was at the KRE-O booth, where attendees could pick up this Optimus Prime Kreon (and by filling out a survey, one might win a Bumblebee KRE-O set, as well).  They were pretty strict about marking badges so each person could only get one, but this little freebie has been showing up in a LOT of other places since (oddly, still called "exclusive" each time), so if you really want one, you shouldn't have too much trouble finding one. 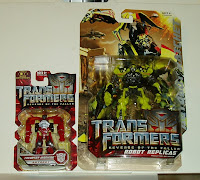 While the dealer room was open, the organizers of the convention gave away hourly door prizes to attendees, donated by the various dealers present.  Prizes ranged from stuff that most fans would never buy for themselves to some truly rare gems.  I had the honor of being BotCon 2011's first door prize winner, and thus won these two toys.  While I confess that these are closer to the first range of prizes than the latter, I do expect to have a bit more to say about the Ratchet figure in due time.  But I'll deal with that later.

The other main event in which attendees had the opportunity to win toys was at the casino night.  There were actually at least three ways one could score some toys that evening.  One potentially-free option was to play bingo.  Players got one card per game for free, but could buy extra cards for one dollar each (all money collected during the casino night event was donated to a hospital near the Fun Publications headquarters in Texas).  Sadly, I didn't win any of the prizes here, but there were some really good prizes available (the entire room audibly gasped when a BotCon 2005 Ratchet was announced as the prize for one game.  The little girl that won that toy was luckier than she likely knows).  The second way was in the main casino room, where donations were encouraged by another wheel, which could be spun one time per $20 donation (admittedly, that makes this casino night option not free, but I need to mention it for the sake of completeness).  That $20 guaranteed you at least 100 extra casino credits (you were given 100 just for registering for the convention), plus whatever you won on the wheel.  The lowest "prize" on the wheel was another 100 credits (for a total of 200 extra credits for your $20), but extremely lucky spins could win sets of BotCon exclusives from previous years, now impossible to find without paying at least 3-digit sums of money for!  The third way of winning toys at the casino night was to use your casino credits to bid on prizes at the auction at the end of the evening. 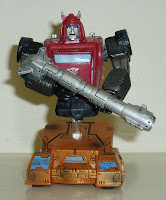 As I mentioned earlier, one was given 100 credits just for registering, so you had something with which to play the casino games.  At the end of the time allotted for playing, I found myself with 800 credits (the 100 I started with, 500 won through two spins on the wheel, plus 200 more that I won through the games).  Clearly I came out "ahead" in the sense that I had won more credits than I started playing with, but since this wasn't real money, I knew that if I didn't have enough to win any auctions, the 800 credits would be totally useless, and I know enough about these kinds of events to know that there would be some people with far, far, more than 800 credits at their disposal.  So there was no sense in my holding back.  After a series of "kiddie" auctions that adults were actually asked not to bid on, I ended up spending all of my 800 credits on the first item available, a bust of Generation One Cliffjumper, in a box autographed by Hasbro employees Rik Alvarez and Aaron Archer ("the two guys responsible for killing off Cliffjumper"--apparently a reference to events in the first episode of the Transformers: Prime series).  Not exactly "free," given what I'd paid for those spins on the wheel, but a quick eBay search indicates that it's worth about the money that I spent, and it was all for charity, and I didn't get left with a bunch of worthless credits, so I figure I did pretty well.
Posted by Mark Baker-Wright at 12:00 AM