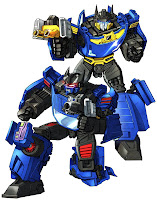 Well, BotCon 2010 is in full swing by now. Sadly, I am unable to be there this year. I'll be posting updates as I get them via Twitter (not to mention the exclusives datasheet), but won't be able to do proper features on the convention exclusive toys (the ones I'm getting, anyway) until I get them myself.

Also, I need to take a moment to apologize for not having the "ceremonial cat shot" as I've done for past club exclusives. The reason, of course, is that I no longer have a cat. You may pause now for a moment of silence.

With that out of the way, here's the official Transformers Collectors' Club version of Punch/Counterpunch. It's a redeco of a mold created for Universe Sunstreaker and Sideswipe, with a new head. When the toy designers created the mold for Universe Sunstreaker (well, Sunstreaker came out first. I don't know who was in mind first during the creation process), they designed a couple of different transformation possibilities for the mold. By offering different transformation instructions (at least, that was the theory) and giving each character a new head, Hasbro could offer two distinct-looking toys out of the same mold. When fans realized this, they pretty much immediately suggested that Punch/Counterpunch was an ideal possibility for a club exclusive using this mold. At last year's BotCon, it was revealed that the club was listening. 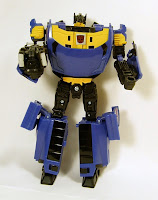 When Punch/Counterpunch was finally offered for pre-order a number of months later, it quickly became the only club exclusive to date to sell out while still in the pre-order process. In fact, out of (what is believed, but not yet confirmed to be) a record 1800 figures available, they were all spoken for in only three days! Naturally, this created a fair bit of anger among many fans, many of whom would argue that it was somehow "unfair" for other fans to snatch up all the figures before they could get to them, but if there's one thing that has become clear about exclusive figures by now, it's that there's no pleasing everyone. (UPDATE: At BotCon 2010, it was announced that the club will be doing a new run of 300 more figures, available only to those unable to get one during the original pre-order process. I don't know when these will be made available, so check the club's site to see when they post details.) 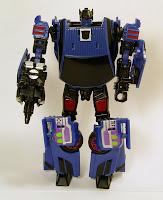 Unfortunately for the Transformers club, Punch/Counterpunch proved to be controversial in a number of other areas, as well. One was the fact that actual photographs of the figure were never released on the club website until after the figure was already starting to arrive in members' mailboxes. Couple this with the fact that the size of the head on this toy is notably smaller than on the Sunstreaker and Sideswipe figures, and many started to argue that the club knew that Punch/Counterpunch was inferior, and were actively trying to hide this fact until it was too late. Personally, I think this argument is pretty outrageous, and in fact pretty hateful. It's not that I think the head couldn't have stood to be a little larger, but I refuse to attribute malice to a group like the club when innocent (if perhaps not particularly flattering) motives will do.

All in all, this is actually a pretty good exclusive, and I really don't get a lot of the fan rage against it. That's not to say that some parts aren't disappointing, but I guess that I'm not one of those who thinks that just because it is an expensive figure is sufficient reason to have a conniption if every aspect isn't perfect. That cost is for the fact that this is a small run, before we've even gotten to the discussion about perfection. Your mileage may (and perhaps does) vary.
Posted by Mark Baker-Wright at 12:00 AM