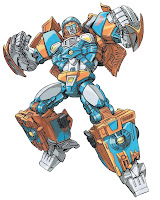 This is truly a season of plenty from the official Transformers Club.  In the past few days, Dion, Punch/Counterpunch, and Shattered Glass Cyclonus have all been arriving in members' mailboxes.  And in just another week, BotCon 2010 will be taking place, bringing with it even more exclusive toys.  I'll be dealing with as many of these figures as I have access to as I have time.  For now, I'll focus on Dion. 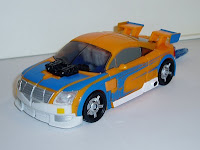 Dion was this year's membership incentive figure, given to all fans whose memberships were active on March 16, 2010.  The club actually refers to it as "free," but since one has to pay a minimum of $40 for a membership, it's easy to see why some fans argue otherwise.  Still, when one considers that this is only the second deluxe-sized incentive figure to be offered by the club in six years (the others were the smaller "scout" size), it's really not a bad deal at all. 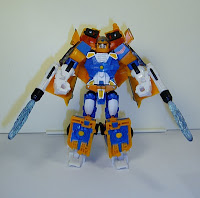 Dion is a redeco of the 2009 Universe Hot Shot mold (or, more properly, the Japanese version of that mold, which includes some minor retooling and a couple of missile launchers the Hasbro version lacks).  This mold is, to be blunt, not especially popular among fans.  I never got Hot Shot, so I can only really comment on the basis of this figure.  The bits of Dion's vehicle mold that sit behind the shoulder's in robot mode really do get in the way pretty bad, limiting the robot's mobility.  A number of ways of dealing with this flaw have been suggested by fans, but these seem to involve removing parts of the figure to relocate them in robot mode, an alternative I'm not particularly thrilled with.  Your mileage may vary, of course. 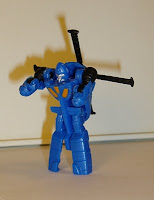 As the Hot Shot mold came with the helicopter Mini-Con, Jolt, that mold is included redecoed with Dion, as well.  This is Cop-Tur, named in homage to a classic GoBots character.  Being a straight redeco of Jolt, Cop-Tur inherits Jolt's deficiencies, as well.  Specifically, Cop-Tur simply cannot stand properly.  The helicopter kibble on back is just too heavy, and will cause Cop-Tur to fall over.  If one poses Cop-Tur with a serious hunchback, and with his arms raised forward, as you see here, the figure can indeed stand unaided, but it does make him look a bit like a zombie. 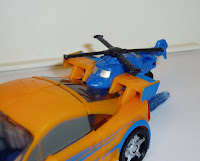 The Universe Hot Shot mold is, of course, patterened after Armada Hot Shot.  The big deal with Armada figures was that, if you plugged a Mini-Con into designated ports on larger figures, you'd activate some kind of special feature.  The Universe mold retains the ability to plug the Mini-Con in, but no special features are activated.  I suppose that one can imagine that Dion is granted flight capabilty if Cop-Tur is plugged in, but I wouldn't take any bets on the official fiction backing up such imaginings.  Assuming they ever get around to featuring Cop-Tur in the first place!
Posted by Mark Baker-Wright at 12:00 AM