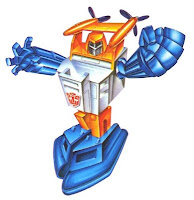 When I started college in 1992, the Transformers toy line had been "dead" for nearly two years. I knew nothing, as of yet, about the fact that Generation Two would be hitting the shelves in just a few short months. So far as I knew, the very concept of "Transformers" only continued to exist in the minds of fans like me ("It never ends!" as Simon Furman infamously said at the end of the letter column of the Marvel comic book). I was therefore extremely surprised to find Seaspray sitting on the pegs of a local Woolworth's while in Asheville that Fall. Needless to say, I snatched the toy up immediately!

Finding Seaspray at a retail (not second-hand) store in 1992 was doubly surprising, since Seaspray was released as part of the second wave of Mini Vehicles in 1985. By all rights, this toy should have been bought years before! It's almost as though the toy was just waiting for me to find it.

I've said a number of times before how scale is a bit inconsistent with Transformers toys most of the time. If you look closely at the vehicle mode here, you'll notice a door in the very back of the white portion. If that door is considered large enough to fit a human being, and if Seaspray is supposed to transform without any size-changing involved, he'd have to rival Omega Surpreme in height! As it is, he's pretty consistently depicted as being one of the shorter Autobots. 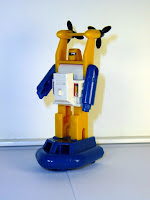 Although the 1985 Mini Vehicles are a welcome departure from just being "car" modes, most of them (all except for Beachcomber) have one "deficiency" in common. None of them have separate feet in robot mode! The robot mode more or less looks humanoid, as if two separate legs are present, and this is borne out by the package art (as seen above), but the feet are eternally fused together in a single piece of plastic. Ah, well, this is before posability was considered quite as important as it is today, and I really can't complain.
Posted by Mark Baker-Wright at 12:00 AM