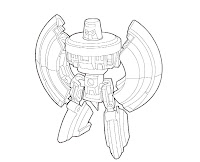 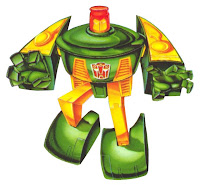 This coming Monday is the 40th anniversary of the first moon landing. I'll have more to say about that on Monday, but for this week's Transformers feature, I thought it would be appropriate to focus on one of the more explicitly space-oriented characters. Having settled on Cosmos, the question then became "which Cosmos toy should I feature?" I finally decided that neither toy is especially complicated, so why not do both? Generation One Cosmos is represented by the images on the left, while Universe Cosmos is featured in the images on the right. As always, you can get a larger view by clicking on each individual image. 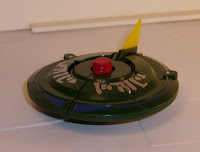 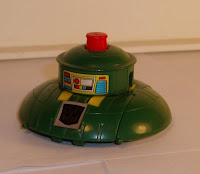 The original Cosmos was part of the same series of Mini Vehicles that gave us Seaspray in 1985. He transforms into a fairly stereotypical (if green) flying saucer. His Tech Specs indicate that Cosmos was primarily used as a communications satellite, and that he would have to remain in Earth orbit for long periods at a time, contributing to deep feelings of loneliness. I really don't remember that the old cartoon (nor the comics, really, but Cosmos didn't really show up much there) ever indicated either Cosmos' communications function nor his loneliness all that much. He certainly wasn't depicted as just "being in orbit all the time" like Robots in Disguise Movor was (I considered doing Movor this week, too, but didn't want to distract from the space-focus by having to deal with the other Ruination team figures, and Movor's pretty boring on his own). For the 2009 Universe updated version, Cosmos' flying saucer mode gets a tail fin in back (replacing the thrusters that you really can't see anyway in the picture on the left) and some strange alien lettering that we're told spells Cosmos' name in Cybertronian, but unlike Banzai-Tron, the lettering used here doesn't actually resemble any pre-existing Cybertronian alphabet yet designed. 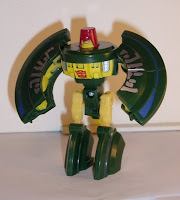 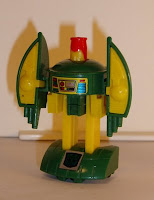 Like most of the other 1985 Mini Vehicles, G1 Cosmos has a robot mode that kinda-sorta looks like he's got two legs, but really ends in a single "unifoot." The placement of the heat-sensitive rubsign only serves to highlight the fact that Cosmos's feet are forever bound together. Universe Cosmos corrects this issue by giving the toy two distinct feet, which are actually quite poseable, in theory, but it achieves this poseability by using ball-and-socket joints that are among the loosest I've ever seen on a Transformers toy. I have yet to successfully transform this toy without a leg (and often an arm, as well) popping off. I'm also not particularly thrilled by Universe Cosmos' arms, since the fists are eternally locked inside the casing, making them rather useless. G1 Cosmos may have had to do with eternally-straight thruster-fingers, but I find them quite a bit more believable that the new look, which reminds me of a person wearing a long-sleeved sweater that's really too long for their arms. Still, one has to respect the attempt, not to mention the apparent difficulty of getting us an updated Cosmos toy at all! (There was a previous attempt that didn't make it past the prototype stage) Good luck finding this toy, though. I've only seen it for sale once, myself, and that was at a Rite Aid that charged an exhorbitant $8.99 for toys of this size (roughly twice what I'd have paid if I could have found it at a Toys R Us or a Target). Even the dealers at BotCon didn't have the toys of this wave (except for one, and I don't recall seeing Cosmos even at that one). If dealers can't find a toy, you know they haven't been distributed very well!
Posted by Mark Baker-Wright at 12:00 AM