For some reason that I cannot fully explain, I've always had a soft spot for the character of Sky Lynx. Yeah, he's an egotist, but there's something about that over-the-top braggadocio that I found endearing when I used to watch the Season 3 episodes of the original Transformers cartoon in which he was often a featured character. Even so, Sky Lynx was definitely one of those toys that was too expensive for me to justify getting as a kid. I'm not entirely sure why I decided to spend the money on the reissue last year, but I'm glad to have the toy now. 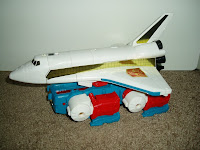 Although the design is definitely decades old now, I'm fond of space shuttles, which I'm sure helps. Although I completely agree with NASA in their decision to retire the space shuttle program in favor of a more cost-effective system (effective next year), this was the space vehicle I grew up on, and I'll miss them when they're gone. In this mode, the blue carrier has an electronic feature that allows the whole thing to roll along on its own. However, I really don't use it much at home, given the carpeting and all.... 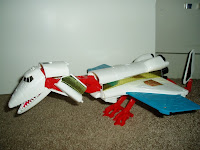 One thing I don't miss from the 1980's is the need to put stickers on all of my Transformers. I really hate having to put on stickers, and getting the Sky Lynx reissue provided me of an acute reminder of why when, in my efforts to get the gold sticker on the opposite site of the shuttle just right, I ended up slicing it right down the middle (those foil stickers are especially fragile!). I did what I could, but I'm sure the egotistical Sky Lynx would appreciate my not taking a picture of what is now his "bad side." 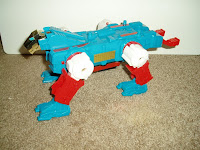 Sky Lynx isn't exactly a "triple-changer" per se, but he does have a couple of different options for how to transform the toy out of his space shuttle mode. The first option is to disconnect the shuttle from the blue carrier, and transform each individually. The shuttle transforms into the bird seen above, while the carrier transforms into a double-tailed "lynx." Why they made this guy with two tails is beyond me. I can only assume that they wanted to emphasize this isn't an earth creature, so much as something that looks a lot like a mechanical version of an earth creature. 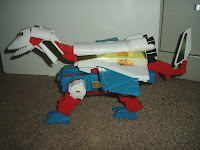 The other transformation option is to pull out the "lynx" legs while transforming the upper part of the bird, but keeping the units attached together. If you flip a switch on the carrier portion, the legs walk in both this and the "lynx" modes, which works a bit better on carpet than the wheels do. Even so, it's a pretty slow walk, and to be honest, I'm not a big fan of electronic gimmicks in my Transformers. I'd just as soon save my batteries for something else.

The fact that this toy was reissued at all is actually kind of amazing. Sky Lynx is one of those Transformers toys released by Hasbro completely independent of their relationship with Takara. Instead, Hasbro worked through a company called "Toy Box," which is no longer in business. In fact, although Sky Lynx was featured in the Transformers cartoon fairly extensively (even in the Japanese dub), the toy was never available in Japan at all in the 1980's. Anyway, since Toy Box went out of business, it was assumed that the molds were lost forever. Then, shortly after Takara merged with Tomy in 2005, someone unexpectedly discovered the molds for Sky Lynx (and fellow Toy Box-molded toy Omega Supreme) in Tomy's storage. Apparently, when Toy Box had originally created the designs, they contracted through Tomy's factories, and thus Tomy had the molds the whole time! Anyway, this led to what was not only Sky Lynx's unforeseen reissue, but actually the first time the toy was ever available in Japan!

Sadly, Hasbro has not seen fit to do a reissue of their own, and it seems rather unlikely that they will change their mind on this, given the less-than-successful history of G1 reissues in the US, whereby most were still sitting on shelves at Toys R Us even after their prices had been dropped by as much as (or more than?) 80% off the admittedly ridiculous prices TRU was originally asking for. Of course, that was partly due to the die-cast metal in most of those reissues, and die-cast metal is expensive. Sky Lynx wouldn't have that problem, at least. Even so, I wouldn't hold my breath hoping for Hasbro to make this one available in the United States.
Posted by Mark Baker-Wright at 12:00 AM