Seeing as today's the Fourth of July, it seemed appropriate to go with a red, white and blue Transformer. There are a few of them to choose from. Most Optimus Primes would qualify, but I thought I'd do something different. For those who don't know, Sentinel Maximus was an exclusive created for the Official Transformers Convention in 2004. But this is definitely a case of things not turning out according to plan. 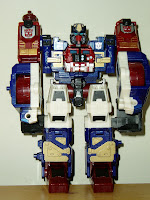 Without getting into a lot of messy details that non-Transformers fans won't care about and that Transformers fans have heard way too much about, this toy wasn't ready in time for the convention itself, and the company that ran the convention lost the license shortly thereafter. Hasbro then saw to it (at their own expense, by all accounts) that Sentinel Maximus was shipped to as many people who had bought it as they could get mailing addresses for. Although it does seem that a few people who paid for it before the convention were still, sadly, unable to get it (apparently a few folks had moved between the time they purchased Sentinel Maximus and the time Hasbro was able to finally get the toy ready), it is thanks to Hasbro's efforts that most fans who had purchased Sentinel Maximus were able to get the toy eventually. 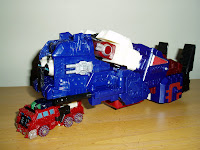 Like all convention exclusives, Sentinel Maximus is a repaint of an earlier toy: in this case, Armada Overload. But the designers were ambitious with this exclusive version. You can already see the remolded head in the robot picture above, but to explain further, I need to back up a bit. The Overload mold was, in some measure, an homage to the headmaster concept. The head of the toy comes off to form another part (technically, it's another Mini-Con, but I said I was done with those, so we'll just ignore that fact). But instead of simply transforming from a head to a smaller robot, this part also transforms to a separate vehicle. The little red truck you see up front in the picture to the left was the part that formed the head in Sentinel Maximus' robot mode, and the rest of the toy forms the trailer. 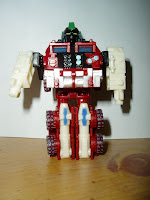 Now, if you just take the truck, and transform it into a robot, you can see that its head was also remolded, when compared to the head of the original version that came with Overload. This little robot is called "Ape-Linq." This is actually the first time that a convention exclusive character was given a second toy (although Hasbro added the hyphen this time around for some reason). Whereas Sentinel Maximus' remolded head resembles Optimus Prime's (or, more accurately, Primal Prime, but that's a long story), Ape-Linq's head is clearly based on the original Apelinq (who was actually just a straight Transmetal Optimus Primal repaint, but this version is clearly intended to homage Apelinq, not Primal). (NOTE for non-Transformers fans: Optimus Prime and Optimus Primal are two distinctly different characters. At least most of the time... Yes, it's really confusing....) 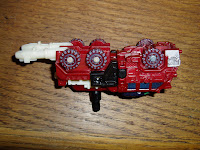 Ape-Linq has a couple of other tricks, admittedly just inherited from the original mold. Besides his vehicle mode (here's a better picture of just the vehicle), he also transforms into a weapon that can be held by a larger robot, making Ape-Linq a rare combination Headmaster and Targetmaster (i.e., a weapon that turns into a small robot. I really need to get around to reviewing a Targetmaster one of these days...). Unfortunately, since turning Ape-Linq into a weapon requires removing Sentinel Maximus' head, and it doesn't really fit in Sentinel Maximus' fists straight anyway, this mode doesn't get used too often.... 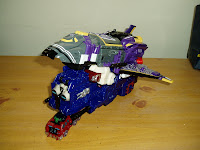 The original version of this mold, Overload, was created to merge with both Armada Optimus Prime and Armada Jetfire to form a super-powered robot. Since Sentinel Maximus was created specifically for a convention, no analogous match-up exists with other toys, but if you happen to have both of those Armada toys, Sentinel Maximus is still perfectly capable of combining with them (and this would actually provide a way to use Ape-Linq's weapon mode!). I actually have very little from Armada, and even less of those larger-sized toys, so I can't demonstrate such a match-up here. However, I decided to play around with the fact that Hasbro eventually released the toy with the words "Official Collectors Club Exclusive" on the package. A few years later, Fun Publications, the new company behind the Transformers club and conventions, released a club exclusive based on the Armada Jetfire mold: Astrotrain. Although Astrotrain is a Decepticon, and therefore an enemy to the Autobot Sentinel Maximus, this gives me a chance to show off Sentinel Maximus' ability to carry Astrotrain around while in vehicle mode. Now we just need an excuse to do an exclusive based on Armada Prime (I'm not holding my breath), and we're good to go!
Posted by Mark Baker-Wright at 7:00 AM