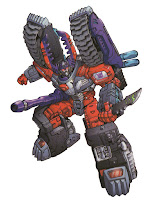 Last week, I talked about an exclusive that was intended to be distributed at the 2004 Official Transformers Convention, but wasn't quite ready in time. This week, I'll talk about the exclusive that actually did make it to the convention. 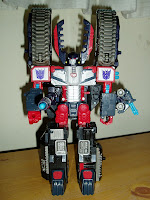 Megazarak is a recolor of the Armada Megatron mold. The story goes that Megazarak is a Decepticon from an alternate reality (the Transformers saga has quite a lot of those!) who was responsible for the total destruction of almost every single Autobot in his own reality (that's not so common!). I imagine that a creature capable of such a feat would make for a rather interesting villain in the stories, but sadly, the only story that exists for Megazarak is a rather short comic that was only available as part of the brochure given at the convention itself, and I've never had a chance to read it (although a short summary is available here). 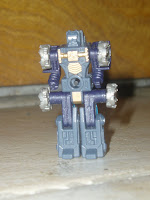 Having originated from an Armada mold, Megazarak comes with a smaller Transformer, in this case named Caliburn. However, as was the case with Sentinel Maximus, the smaller Transformer is not generally referred to as a "Mini-Con," as the Armada versions would have been. Indeed, Caliburn is referred to as a "Micromaster," although I expect he could just as well have been called a "Targetmaster" (you can see one of Caliburn's weapon modes attached to Megazarak's arm in the picture above. Note: Ape-Linq is called a "Mini-Con" on Sentinel Maximus' packaging, but almost nowhere else. Caliburn, on the other hand, is never called a "Mini-Con," despite the Mini-Con insignia that Caliburn retains as part of the original mold). 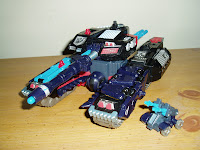 Megazarak turns into a kind of tank, while Caliburn can transform into a wheeled-buggy with blasters. Although the electronics have been removed from this mold (as is common with most convention or club exclusives), there are still a number of spring-loaded gimmicks that can be activated if you plug Caliburn into various hardpoints on Megazarak's surface. While these features make for a fun toy, they don't translate very well into a series of pictures, so rather than bore you with that, you'll just have to take my word for it!
Posted by Mark Baker-Wright at 7:00 AM