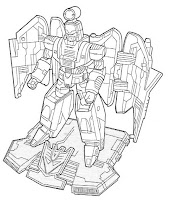 To hear some Transformers fans tell it, die-cast construction is the epitome of toy design, and plastic is an inferior substitute. I'm not one of those fans. I find that plastic allows for more durable toys (metal actually chips and breaks when stressed! Plastic can bend if it needs to!), and can be molded into a far greater variety of shapes, allowing for more complex designs and transformations. Still, if having a sheer heft is something one wants out of one's toy robots, there is certainly a feel to die-cast metal that one simply cannot duplicate with plastic.

When Hasbro's subdivision, Galoob, started releasing Transformers with die-cast designs (the first all-new such designs since the mid-80s) with their "Titanium" sub-line, many fans shouted for joy. Others of us were put off by the $15 price tag that went on the transformable toys (there were smaller toys for cheaper, but even the Transformers characters at this lower price point were just figurines). I've commented quite a few times over that I'm pretty price-conscious, so it's probably no surprise that I haven't picked up many of the Titaniums. In fact, the one I'm reviewing today is one that I got as a gift. One of the advantages of having a sub-line such as "Titaniums," besides providing an outlet for those fans who ached for a return to the days of die-cast construction, is that the sub-line allows for certain characters who just don't "fit" in the context of any of the currently existent main lines. For example, Scourge (not to be confused with this guy from a few weeks ago) was a fairly significant character back in 1986. Characters that came out that year either were introduced in the animated movie, or the final full year of the cartoon that came out after it (assuming that they showed up in the cartoon at all!). And no toy had been released for this character since the two nigh-identical toys released in 1986 and 1987, so Scourge had been in limbo for quite some time. Scourge was created during the events of the animated Transformers movie by Unicron, ostensibly to help Galvatron in his quest to retrieve the Autobot Matrix of Leadership (the only thing that could destroy Unicron). After Unicron's destruction at the end of the movie, Scourge remained one of Galvatron's most loyal troops. Never having been created to do battle on Earth, Scourge transforms into an odd "futuristic" vehicle that's something of a cross between a hovercraft and a spaceship. The Titanium version of the toy updates the G1 version in a fairly subtle way that nonetheless captures the spirit of the original rather well.

Now, a disclaimer should be made here, although Titaniums are called such because of the die-cast construction that went into them, no Transformer (not even the original die-cast Transformers of the first few years of G1) has ever been made entirely out of metal. Even die-cast Transformers have some plastic parts, and Titanium Scourge is no exception. In the case of Scourge, the metal is almost entirely focused on two areas, the core of the robot (the chest, if you will) and the legs. These metal blocks are held together with various plastic parts: arms, thighs, the head, and the wings. But the preponderance of die-cast in this robot means that Titanium Scourge falls prey to the same limitations that early '80s die-cast Transformers did, and the transformation is pretty simple as a result. Rotate and connect the legs while pointing the toes forward, close the wings around the arms to form a shell, and then raise the head into position. This is more or less the same transformation as G1 Scourge had, so perhaps it doesn't seem like such a limitation, but it's still considerably simpler than most other Transformers of the modern era. In fact, this is one of the few Titanium Transformers that was based on a character that already had an existing toy where it can nonetheless be said that the Titanium version is an improvement on the original, rather than a toy that had to sacrifice certain details for the sake of including die-cast.

Although Titanium Transformers lasted for a couple of years, they never did sell altogether well (largely due to the $15 price) and stores were reluctant to carry more characters when they still had less popular ones warming the shelves, exacerbating the problem. Hasbro/Galoob finally threw in the towel on this sub-line about a year ago, arguably just as they were finally starting to figure out how to take full advantage of the unique combination of opportunities and limitations of the concept. One can only hope that concepts revealed at BotCon last year, featuring the return of classic characters Cosmos, Shockwave, and Arcee in Titanium form, can see the light of day in some non-Titanium line in the future!
Posted by Mark Baker-Wright at 7:00 AM