When discussing Armada Unicron, I briefly mentioned the creation of the "Mini-Cons," small Transformers that added a new faction to the Transformers saga. Three of the most prominent Mini-Cons in the Armada toyline were (as pictured from left to right in the pictures below) High Wire, Sureshock, and Grindor--collectively known as the Street Action Mini-Con Team. These three look best in their vehicle modes, at least when viewed individually, so let's start with that picture. 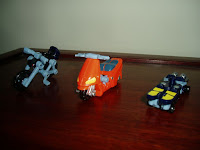 These three Mini-Cons were the first discovered at the beginning of the Armada storyline, and each quickly formed a bond with one of the three human children who also played pivotal roles to the story: Rad, Carlos, and Alexis. There, I've acknowledged the humans' existence. We'll speak no more about it.... ;) 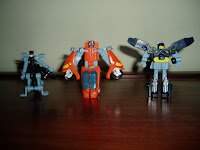 I wish I could write more enthusiastically about the robots themselves, but the robot modes of two of these three are really pretty sad. High Wire is an interesting attempt to do a bicycle at such a small scale, but he's pretty pathetic looking. Sureshock is the only Transformer I know of offhand who's robot face is actually split down the middle during transformation! And neither of them have proper hands! At least Grindor isn't too bad, but he doesn't really save the set on his own. 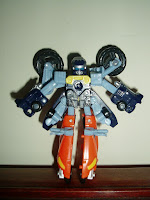 What does make this set worth discussing is the fact that they combine into a single, larger, robot (although still not very large) named Perceptor. I still have no idea why Hasbro chose to name this guy Perceptor. He has absolutely nothing in common with the Generation One character of that name. But, if one ignores the name, he's a pretty decent gestalt, and makes the set worth having. I just never, ever, transform the team out of their combined form (except, of course, to take pictures such as these!).

Armada was only the first step of what eventually came to be referred to by fans as the "Unicron Trilogy." These three characters showed up again in new forms in the second step: "Energon." I'll deal with these guys' Energon forms next week.
Posted by Mark Baker-Wright at 7:00 AM