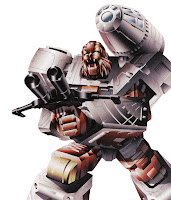 Although Transformers are certainly among the most profitable of Hasbro's properties, the position of "Number One" has been held by the Star Wars line for many years now. Over the course of most of the past 30 years, Hasbro has somehow managed to continually produce new Star Wars product. Of course, after having produced figures for practically every character to get so much as a fraction of a second of screen time in one of the movies or other media dedicated to the franchise, it perhaps makes sense that Hasbro would want to explore new and different options for selling Star Wars product. So why not combine two of their most successful toylines? Hence, "Star Wars Transformers" became a reality. Although each of the toys in this line has a short bio or story piece on the back of the package, it's probably not worth thinking too deeply about. Few fans of either franchise imagine that, somehow between scenes, popular Star Wars vehicles have actually transformed to robots to continue fighting the battle between the heroic Rebellion and the evil Empire. It's pretty much just a way to sell toys. As that motive goes, the line's apparently done well enough to continue running for a few years now, although I have to confess that most Transformers fans find the majority of the line to be a bit lackluster. I find the Millennium Falcon to be one of the pleasant exceptions to this rule, but even still, I didn't take the plunge of picking one up until after the toy went on clearance for barely more than a third of its original retail price of $35. Each Star Wars Transformer vehicle transforms into a robot resembling some Star Wars character commonly associated with it. The Millennium Falcon is unique in that it actually splits up to transform into two robots: one resembling Han Solo, and the other resembling Chewbacca. Each robot has appropriate weapons (Chewbacca's even bears a passing resemblance to his signature bowcaster) and buttons that, when pressed, create lights and sounds using sound effects and voice clips from the actual movies. Unfortunately, the electronics in this toy were not created to tie the sounds to whatever mode the toy happens to be in, so you occasionally hear Chewbacca's groan while in vehicle mode, or the Falcon's engines in robot mode. However, the vocal sounds are specifically tied to the appropriate robot, so you won't hear Han Solo trying to imitate Chewbacca! It should be further noted that the toy designers do not intend for these robotic forms to actually be the characters they resemble. In fact, each Star Wars Transformer comes with tiny figures that can fit inside the vehicle. These figures are less than an inch-and-a-half tall, and are probably still too large to be properly in scale with the vehicles as they show up in the movies! But they do fit in the cockpit just fine, and each robot has a place to fit them, as well, so one can imagine that the "real" Han and/or Chewie are controlling the robotic mecha that resembles them. Let the Empire beware!
Posted by Mark Baker-Wright at 7:00 AM