In Defense of Repaints

Among Transformers fans, it's popular to hate repaints. For those who aren't familiar with the term, a "repaint" is a toy that uses the exact same mold as an existing toy, with only the colors changed. (Such toys are often called "recolors" for this reason, but "repaint" seem to be the more popular term.) Understandably, many fans prefer to spend their hard-earned dollars on toys that don't too closely resemble something they already own.

However, simple economics dictate that it is far more expensive to produce the engineering and molds required to make completely original toys each time, and repaints are a way of getting more profit out of each mold. This has been true since the very earliest days of the Transformers franchise (and even earlier, but we're not talking about other toy lines or companies). 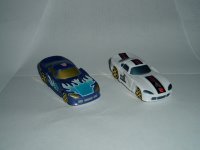 So, repaints are here to stay. But as long as a little creativity is exercised, a repainted toy can still be a worthwhile purchase. For example, take these two small Dodge Viper toys. The one on the left, Side Burn, was released as part of the "Robots in Disguise" line, painted to resemble the larger Side Burn toy in vehicle mode (the robot modes look nothing alike). A few years later, the mold was used again to resemble one of the classic original Transformers, Jazz (again, only in vehicle mode, as the robot mode of this small repaint is one of the most boring I've ever seen. While they were doing a "repaint," a little MORE "paint" would have been nice...). It's worth noting that this mold itself was originally intended to be used years earlier, as part of the "Generation Two" line, but the mold was put into storage after the abrupt switch to "Beast Wars" we've discussed earlier. 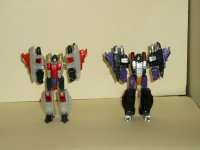 Another example is these two figures. The one on the left is a small figure from the current "Cybertron" line called Starscream (You might even be able to find this one at a toy or drug store near you, although it took me a fair while to find it myself, and I keep track of this stuff!). The one on the right, Skywarp, was an exclusive given away for free to people who attended last year's San Diego Comic-Con. Since the only way to originally get Skywarp was to actually go to San Diego, this figure has been fetching prices on eBay of around $15. There's another version out there that was given away at last year's BotCon: Ramjet, which also can be found on eBay for inflated prices.

Related to the issue of repaints is the "remold" (also sometimes called a "retool"), in which some part of the original mold (usually the head) is modified to make a slightly new toy, in addition to the recoloring. Many Transformers fans, who don't care for repaints, insist that any reuse of a mold should at least involve "remolding," but it should be noted that although creating a "remold" is indeed cheaper than creating a completely original toy, it is still quite expensive to do, and so we will most likely always see a mixture of repaints, remolds, and original toys. 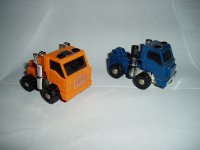 One particularly early and creative example of a "remold" is the toy on the right here, called Pipes. Pipes was created out of the mold of one of the very first Transformers ever produced: Huffer, seen on the left. Note the different styles of smokestacks, and the modified grille on the front of the cab. The back "hitch" area of each truck is different, too, although you may not be able to tell that from the picture. 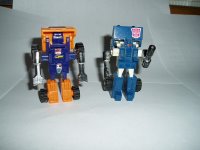 The differences don't end there, though, for this is a rare case in which a remold was actually created to transform differently than the original toy. In this picture, you can see how Huffer's head was revealed just underneath the cab, and the robot details were molded underneath the toy. On Pipes, the cab moves out of the way to reveal the head molded into the main body of the toy, and the robot torso details are from the top of the toy (not including the cab itself). This also explains why the "elbows" bend differently on Huffer than on Pipes.

There are tons of other repaint and remold examples that I could pull out, some more impressive than others. In some examples, I would even go so far as to say that the "repaint" is a more interesting toy than the original. For example, check out Cannonball, a toy I don't yet have myself, which was repainted from Cybertron Red Alert (which I haven't gotten either). The Hasbro bio (unlocked from a code that comes with the toy) not only indicates that Cannonball is a pirate, but has essentially made Cannonball out to be the Transformer version of the "Dread Pirate Roberts" from The Princess Bride! That bio alone is incentive for me to possibly pick up this toy, although I never bothered with the original version. But, ultimately, the decision of whether or not a repaint is worth buying must be left up to the individual.
Posted by Mark Baker-Wright at 8:24 AM