A History of the Marvel Transformers Comics

Although BotCon is the "official" Transformers Convention (sponsored by Hasbro and featuring exclusive toys and so forth), there are a number of "unofficial" Transformers conventions out there. Iacon One took place in Indiana last weekend, and although I was unable to attend myself, I have been reading about some of the events there with interest.

One of the guests at Iacon One was Bob Budiansky, who was responsible for much of the earliest work in developing the Transformers, back when it was simply a new line of toys that Hasbro was creating, based on a couple of little-known lines of changeable robot toys in Japan. Budiansky would go on to be the regular writer for the Transformers comic book series put out by Marvel Comic books for a little over four years. 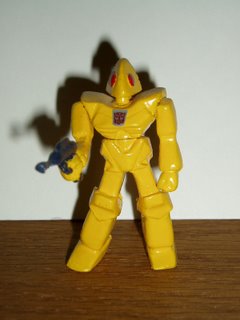 I was especially thrilled to find a transcript of an interview with Bob Budiansky (and current comic artist Don Figueroa) at the alt.toys.transformers newsgroup (one of the original and longest-standing venues for Transformers communication on the Internet) compiled by "crazysteve," who I met at BotCon 2004 a couple of years ago and from whom I'd received this custom figure of a character named "Scrounge" only a couple of months previously for writing a silly little poem about the character to win a contest "crazysteve" was having. "Scrounge" was a character created by Budiansky who appeared in a particularly pivotal story in the comic book. You'll have to read the interview to learn more about him. ;)

Anyway, the interview details some of the history behind how the Transformers came to be, from the memories of one of the people most involved in that early process. I encourage you to check it out.
Posted by Mark Baker-Wright at 8:33 AM