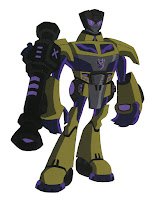 When I learned the sad news that legendary comedian Fred Willard passed away a couple of weeks ago at the age of 86, my immediate thought was to do a re-post of his contribution to the Transformers franchise, Animated Swindle, believing that I had featured the toy when I did a spate of Animated toys in the lead-up to BotCon 2011 (if not elsewhere). Of course, I quickly learned that I had not done a feature on Swindle at that time, so I've pulled the toy out to rectify that error now. 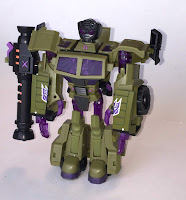 Like most Animated characters, Swindle is an homage to a character from Generation One. The original Swindle has the distinction of being one of the few non-leaders of a combiner team to have become at least as well-known as an individual as he is as a member of his team. This is, of course, in large part due to his personality as a husker who would sell anything to anybody if he thought it would be an asset to him. To my mind, Fred Willard was an inspired choice to provide Animated Swindle's voice, having seen him in a similar role in the Christopher Guest mockumentary, A Mighty Wind, and later as an unscrupulous CEO in Pixar's WALL-E (released mere weeks after Animated Swindle's first appearance). Willard's Swindle was a fast-talking opportunist, ready to turn any situation to his advantage. Truly a great homage. 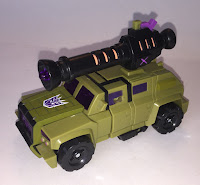 Swindle's alternate mode is more like a Humvee than the G1 version's Jeep (although, of course, it's not an exact match, so as to avoid trademark concerns), but is well in-keeping with other Animated reinterpretations. Swindle's main weapon is a cannon that can fire a purple missile. The designers went an extra step in the design of this cannon, giving it slits along the barrel that reveal a bright orange color when the missile is loaded (as seen here). Firing the cannon hides the orange paint, revealing just the dark purple translucent plastic used for the missile and elsewhere on Swindle. It's a place where Hasbro really went the extra mile, and it is appreciated. (Click here to see an animated GIF of the cannon in action!) 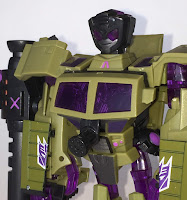 Animated Swindle has a couple of other surprises, as well. One is a Gatling-style weapon that can be revealed at Swindle's chest cavity. The other is the way that the translucent purple plastic was molded for Swindle's eyes. If you look closely, with a decent light-source behind Swindle's head, you can see that Swindle's eyes actually have pupils! These really add to the character of this little toy. 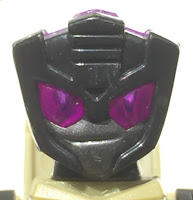 That's not to say that Animated Swindle is without fault. My main concern is that the translucent purple plastic that makes so much of this toy "pop" is used all over it. I'm concerned that this could make the toy prone to breaking over time, and thus I have tried to handle it with care for the past decade. So far, my toy's still in good shape, but this is definitely something to watch out for if you find a specimen on eBay.
Posted by Mark Baker-Wright at 9:00 AM