I have never made a secret of my disdain for the version of the Transformers franchise that started with the live-action movie of 2007. Even so, and while it will never be a major part of my collection, I do have a few movie-related toys. In particular, the "Cyberverse" line, which started in 2011 with the Dark of the Moon toyline, offered some interesting options for a comparatively low price.

Cyberverse toys were roughly similar in size to each other (3 to 4 inches tall in robot mode), and were designed for compatibility with 3mm accessories (usually weapons, but also things like swords, armor, and wings, among other options). Figures were sold on their own at a couple of price-points (the "Legion" class and the slightly larger "Commander" class), or with playsets, such as the Armored Weapons Platform featured here. Even by 2011, it was becoming comparatively uncommon for an Optimus Prime toy to come with a transforming trailer, and the novelty of such a release at a small scale was definitely part of the reason I picked this up (although I apparently even then waited until finding the toy at a reduced price at Big Lots). 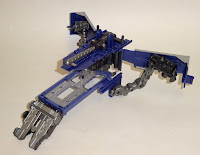 Like most Optimus Prime trailers, this trailer turns into a base that Prime (to say nothing of other Cyberverse figures) can interact with. There's a missile at the top center of the base that can be fired by pressing down on a button just behind it (assuming the missile hasn't already flown off on its own when transforming the trailer to this mode. Watch out!). There are a couple of pegs just behind the missile launcher that are compatible with Prime's 3mm fists. 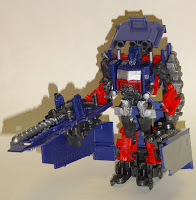 The Prime figure, itself, isn't anything unusual (and, indeed, the mold was used for several releases during this era. Here's a link if you really want to see Prime by himself), but the trailer has a third mode, this time serving as what the package calls an "assault vehicle mode," but which is really more of a battle suit for the Prime figure. The missile launcher is still in use, this time as an extended "hand" weapon, although one assumes that Prime must manipulate controls in the 3mm pegs that his hands fit into in this mode.

Finally, this playset comes with an "action scene" that can be used for putting the figure on display. I would have preferred another choice of background... probably something neutral like a desert, but definitely something without humans walking around to ruin the sense of the robot's size... but the fact remains that such display accessories are fairly uncommon in Transformers sets, and do add an extra element of value to the set (at a presumably low cost to Hasbro to produce). Ultimately, the fact that this is a movie-related set means that I tend to keep it in storage, and out of sight. But for those who do enjoy the live-action movie toys, this set is worth considering.
Posted by Mark Baker-Wright at 9:00 AM