Like the Combaticon toys they shared molds with, five Fall of Cybertron Wrecker toys were released at retail. However, the following year, the Transformers Collectors' Club released a sixth member as part of their Figure Subscription Service, so this entry features Whirl, the last of the retail-released Wreckers (on the left of these images), alongside Fisitron, the TCC addition (on the right, based on an obscure character originally named Ironfist, featured among the Wreckers in the IDW comics and renamed anagrammatically for trademark reasons).

Whirl is a reuse of the mold created for Vortex (with a new Whirl-appropriate head), while Fisitron uses the same mold as Roadbuster, right down to the head created for Roadbuster to ensure that it wasn't just a recolored Swindle. While Whirl does include a new action weapon (seen in the vehicle image below), Fisitron came only with the hand weapon originally created for the Swindle mold.

Fan reaction to these toys was fairly mixed at the time they were released. While many appreciated the attempt to create new "Cybertronian" forms for classic characters, the toys came out during an era where Hasbro's ever-evolving attempts to minimize production costs for the viable retail price points meant that these toys seemed somewhat hollow when compared to similarly-priced toys of only a year or two prior. Other criticisms included the torso robot (Impactor, in this case) being the same size as the limbs, the inconsistent "hands" given to each limb robot (a by-product of making all such appendages a part of the toys themselves, rather than using attachments, as was done in Generation One), and the mechanism through which combiner limbs were attached to the torso, which is a bit less forgiving than the one later devised for Combiner Wars limbs. 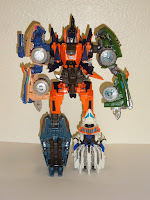 While it is undeniably true that the sheer number of mold reuses (no fewer than four for each of these molds in the US alone) were simply too much for many fans even before the TCC offered up Fisitron, I personally saw the reuse of the Roadbuster mold for Fisitron as a way of correcting the "inconsistent hands" problem for Ruination (and I thought that the Roadbuster/Swindle mold had the best fists of any of the team members, anyway). Even before my Fisitron arrived, I had resolved to use both Roadbuster and Fisitron as the arms in my specimen of Ruination. This was further facilitated when I discovered via a fan's comments on one of the message boards that Whirl's "skirt" could fit securely within the cavity in Impactor's back in combined mode. Thus, I use this arrangement for Ruination in my own collection.

Thanks for bearing with me though this end-of-year multi-post feature on the Fall of Cybertron Wreckers. See you in 2020! 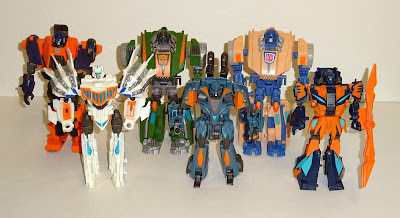