In recent years, the teams at both Hasbro and Takara have made a concerted effort to release new Transformers toys that homage toys and characters from the early days of the franchise (especially what we now call "Generation One"). This has led to a revisitation of gimmicks not seen in widespread use since the 1980s. The recent Titans Return line (and its counterpart Legends toys in Japan) revisits the classic "Headmasters" gimmick in a major way. 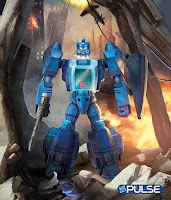 As most fans know, the Headmasters were a group of robots, first released in 1987, with detachable heads that could, in turn, transform into tiny robots themselves. Titans Return not only brought back the original Headmaster characters, but applied the gimmick to nearly all of the toys released under the Titans Return banner, including many characters that, while also being from roughly that era, were never Headmasters in Generation One. One of the first characters to be released under the Titans Return banner was Blurr. This toy was a very dark shade of blue, and I felt that it didn't capture the character very well at all, so I never bought it.

Thankfully, Japan soon followed this up with their own version under the Legends line, using the same mold, but in colors intended to more closely match the classic cartoons. To be fair to Hasbro, the cartoons did more-or-less invert the light and dark shades of blue found in the original Blurr toy, and I imagine that Titans Return Blurr was attempting to emulate the original toy, rather than the cartoon Blurr, but I think they went too dark, even for that goal. This much lighter shade of blue looks far more like Blurr, to my eyes.

Although Blurr was never a Headmaster in Generation One, he was given a Targetmaster partner the year after his original toy was released. This partner, named "Haywire," is included with the Titans Return version, as well, but instead of turning into a weapon, now becomes Blurr's head (although he's now called "Hyperfire" for trademark reasons. Also, I should note that these little guys are called "Titan Masters" in this line, rather than "Headmasters," but the gimmick is the same). The partner is also included with the Legends version, but since Headmasters were done rather differently in Japan, he's not called "Haywire" there, but this is simply Blurr's head turning into a smaller robot.

Another significant difference between most Titans Return toys and their Legends counterparts is that Legends toys tend to feature far more paint than the American versions. This has often been true of Japanese versions of the same toys we get in America, as the economic factors leading each company to make such decisions are quite different in each country. Unfortunately, this "benefit" in Japan may be coming to an end, as more recent Japanese Transformers toys are being released absolutely identical to the American versions. While this may mean having to settle for less attractive decos, it also means that there's less reason to pay the additional costs involved in shipping a toy overseas. My budget, for one, will probably be much healthier going forward!
Posted by Mark Baker-Wright at 9:00 AM